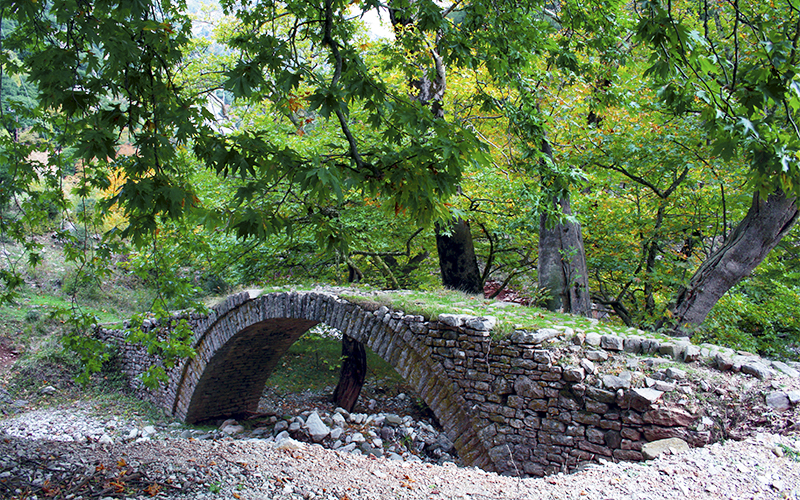 Small villages, nestled in the arms of vast landscapes, unspoiled by the city, enthrone their visitors at the top of a different Greece.

The walk in the sanctuaries of Argithea, looks like a three-dimensional dream that you see with eyes and mind open. Time has left its mark giving uniqueness to this place.

Twenty-six villages narrate their own stories, sometimes with the background of the white color of snow and covered by the clouds and sometimes well hidden in the green of the forests.

One of the most beautiful routes of mainland Greece starts a few kilometers outside Karditsa, where the huge mountain range of Pindos is standing. 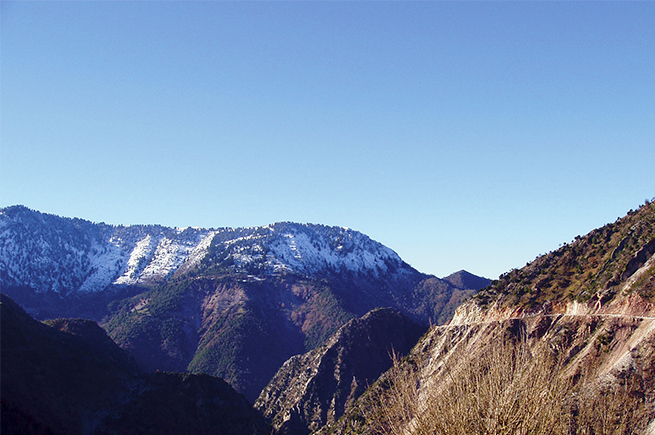 They are a pleasant revelation for the visitor. It is the garden of Eden where villages of unique beauty are nesting. On the mountains, there are relatively easy routes which are suitable for many forms of alternative tourism.

Hiking at the E4 trail, mountaineering, 4x4 wheel drive routes and also with a bike, are some of the options for the visitors who arrive in the area. 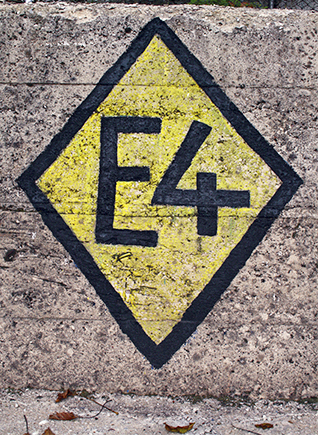 But the most fascinating thing, is the beauty of the mountain. Slopes are painted with the colors of each season and endless forests of beech, oak, chestnut, fir, meet oases next to winding river streams.

First day - Getting to know the villages of East Argithea

Agios Nikolaos is a small hamlet, at which every year the inhabitants of the villages of Argithea gather, keeping the traditional custom. After passing the 15 km forest road, we reach in Fylakti and from there after 500 meters we are in front of the sign that guides us on the left to the village Petrilo and on the right to Vlasi and to I.M. Spilia. 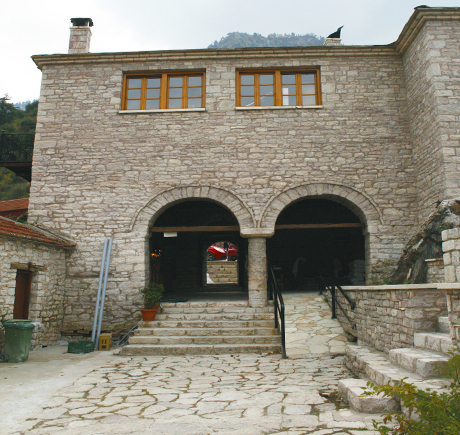 At an altitude of 1,200 m and 64 km southwest of Karditsa, we meet the historical village of Petrilo with its seven neighborhoods, which rests on the western edges of Mount Voutsikaki.

The descent compensates us by revealing to us the biggest village of Vlasi, which stretches on the steep slope of Mount Schizokaravos at an altitude of 2,184 meters.

Here, the stone houses stand out, which are still preserved till today, as well as the stone arched bridges. 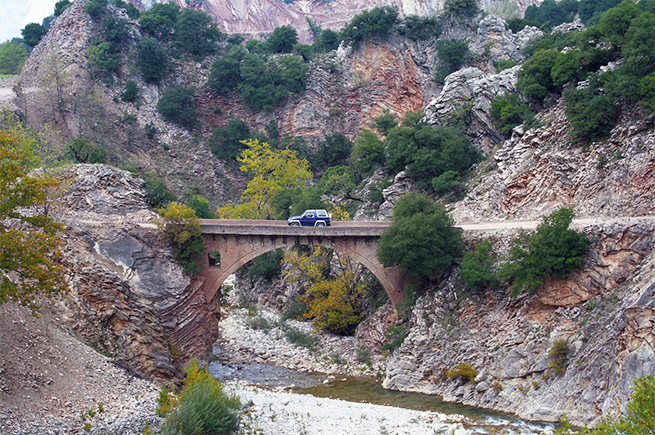 From the top of the mountain, which is linked to the E4 international path and which is suitable for climbing, the gaze travels to a green horizon, and the senses are so calm in this peaceful nature, that even the vibration of the cell phone seems discordant.

Continuing the route, having as background the Thessalian goddess and being satiated from the oxygen and the traditional dishes, we reach Leontitos. The community is surrounded by fir and fruit bearing trees. Built at an altitude of 1,000 meters, the village looks close to the stars. In winter, the permanent residents are only forty, while in the summer, they amount to 380.

The history says that in the summer of 1823, George Karaiskakis stayed in the village, at the house next to the Holy Temple of Agia Paraskevi. 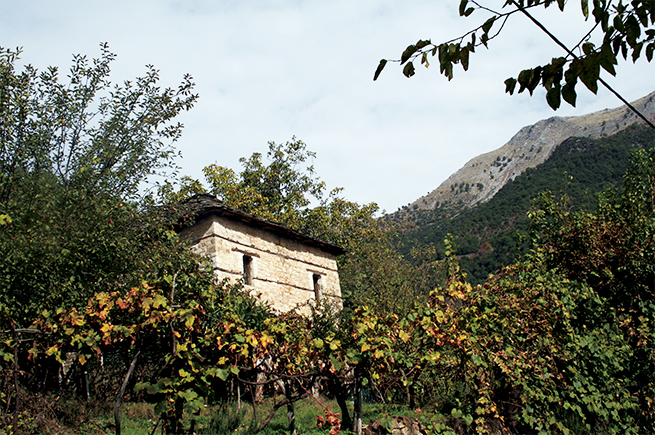 With the company of Mr. Babis' family and good tsipouro (traditional drink) at the "Delidimi" guesthouse, where we stopped to rest and to gather information for the rest of the route, we gaze at the mixed colors of the plain and the trees to mingle with the clouds. 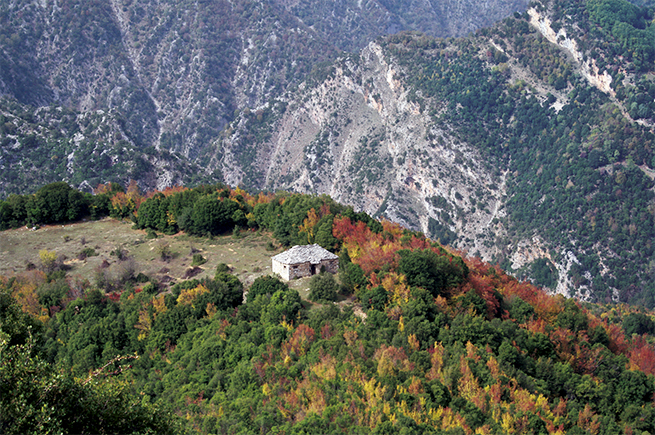 After a good rest, we leave the company who cordially offered us their hospitality, to continue our path. We reach the Sacred Monastery of Spilia, which is known for its miracles, as we were told by a lady who grabs every chance to get there and to enjoy the beauty and the love of the village.

-The road to the monastery is a dirt road and it needs attention!
-The route is ideal for motor enthusiasts!

With awe we pass the gates of the monastery and walk inward. Built on the prominence of the rock in the 17th century, the holy monastery consists of two small churches. 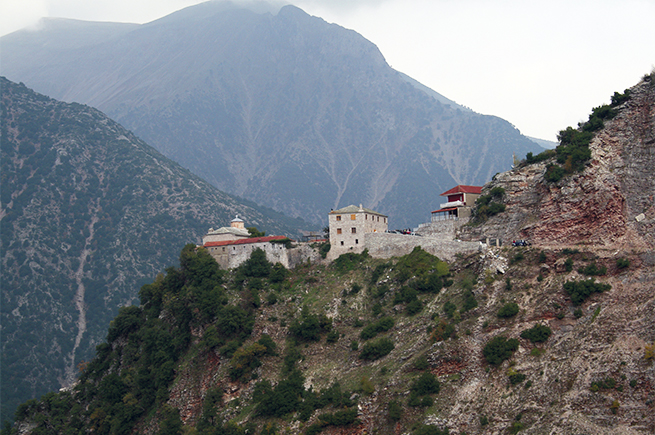 The first is dedicated to Virgin Mary, and the second one is the church of Zoodochos Pigi, which according to the inscription on the lintel of the temple, was built in 1736.

This monument is a reference point of the 1821 war, as the Revolutionary Government had its headquarters there, in 1876. If you happen to be around here, you must not miss to visit this place. Just a few kilometers away, there is Lake Stefania, created after a landslide during heavy rainfall.

The locals say that at that time, many people lost their houses, as the lake covered them with its waters. 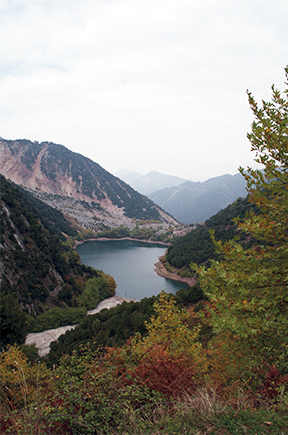 The small settlements seem to obey the modern rules and laws while protecting the beautiful landscape and the particular needs of the surrounding nature. Stone buildings, scattered taverns and rooms to let, offer the traveler both mystery of exploration and warmth of the mountain sanctuary balancing between tradition and tourism.

The local authorities, being aware of the frosty weather that prevails in the eastern and western Argithea, are constantly improving the road network so that tourists can enjoy their stay and move easily, even when the snow covers the lush forests.

This unknown side of Argithea, though wild, is beautiful. The first village we meet is Argithea. Deep ravines interrupting the silence with their hum, rivers with plane trees on their banks, steep canyons and towering mountains, compose this magic place. 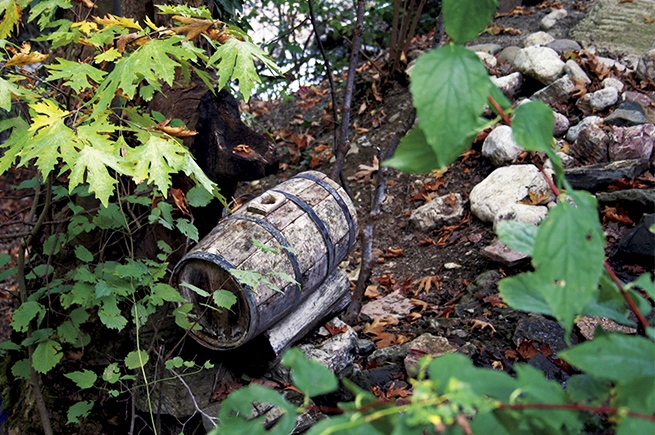 Argithea is a village hidden in the fir trees and meets the horizon in every corner of it. In history, Athamas king of Boeotia and his descendants, inhabited here.

Irrefutable witnesses are the archaeological sites and the burial monuments of that time, which are scattered along the road and easy to be observed. We wander around the villages and make several stops to make an acquaintance with the locals.

Moving ahead, sometimes parallel to Mount Karava and other times leaving it behind, we arrive at Therino, 65 km from Karditsa and only 6 km from the municipality of Argithea. 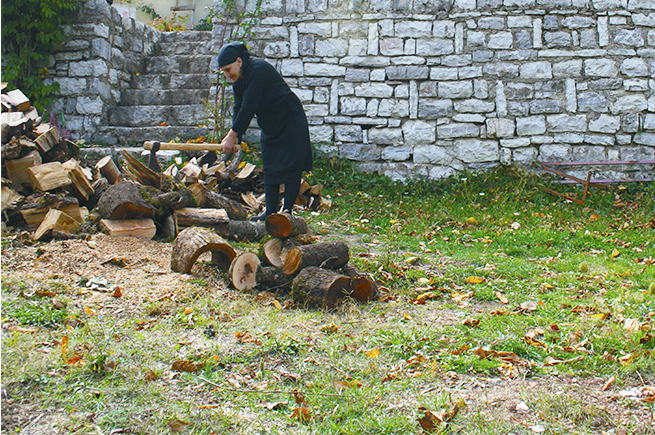 The permanent residents of the village are almost sixty during winter, while in the summer months the number is increasing a lot. In addition to the rich religious interest in the area with countless churches and monasteries, an old watermill dating back to 1870, still survives in the "Goura" location.

-The main occupations of the inhabitants are agriculture, livestock farming and beekeeping. 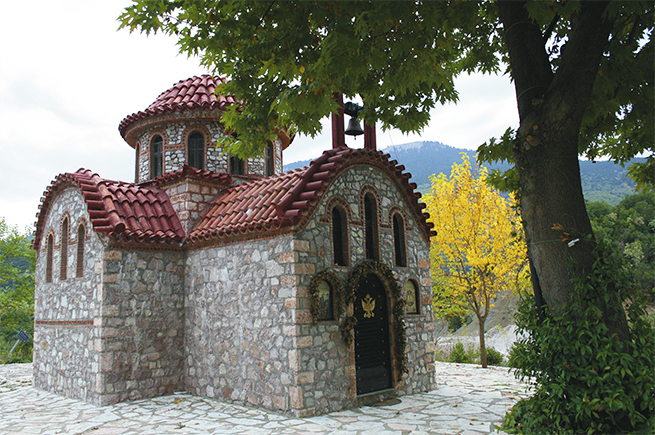 After almost 15 km, we meet Karya, an area with many stone bridges. We stop at a local café to enjoy traditional Greek coffee! Time passes and we re-board our cars and go fast to visit the other places of the area. The uphill and downhill road is asphalted and helps us to move fast, but tires our small car.

It is almost noon and the company decides that the time has come for a break and we are doing it at the "Monopoleion". Omelets, local potatoes and tsipouro, are served at the right time making us feel like home. After clinking our glasses and tasting a little bit of everything, I begin to get to know the owners of the "café", as they like to call it. Viki, with the cheerful smile on her face, informs me that her origin is from Monemvasia. Something that makes me ask her, how she found herself here in the mountains. Her answer is honest and disarming: "Due to love, she says". With her husband, who is also the teacher of the village, she created this café with these delicacies, wanting to offer hospitality and geniality to the visitors who can hardly resist the cooking of Viki.

We arrive at Petroto with its three stone bridges that resist the time. The bridge built in the area Poupis in the 13th-14th century, the Korakos bridge, the largest of the area that was built in 1514-5 by the metropolitan of Larissa St. Bessarion, with the help of sponsorships from Greek expatriates, which was blown up by the rebels during the Civil War and finally "Koutsokamara" in the area of Sykia. 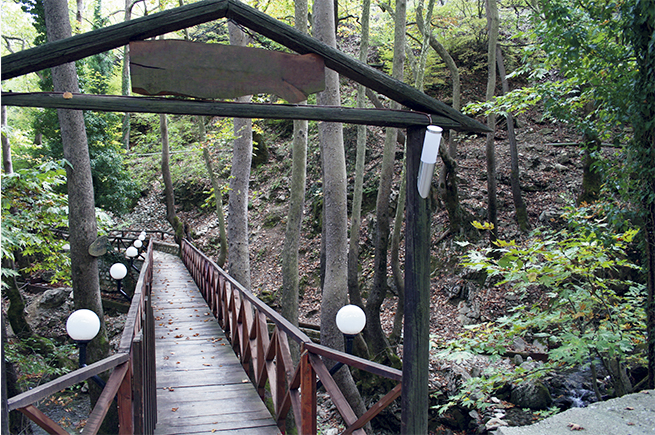 Next, we make a stop for a walk on the alleys of the traditional village Kali Komi. Its sixty permanent residents are engaged in agriculture and livestock farming, as in the previous villages.

In Kali Komi, resides an interesting watermill which was functioning till 1996 and there are stone houses over a hundred years old. 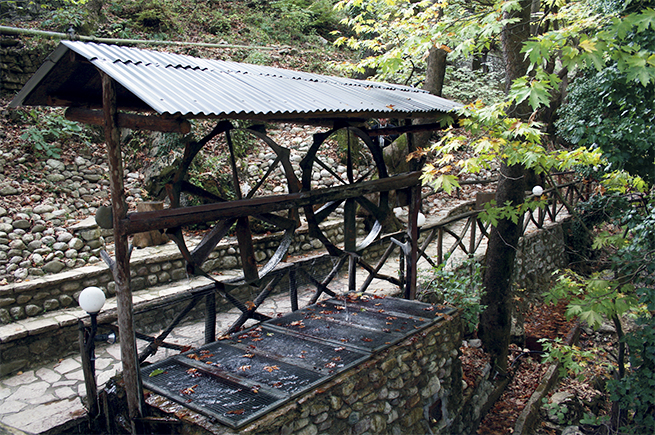 The spring fountains cool and quench with their cool water the walkers who want to reach Boutsos, the highest peak of the mountain Botsi, to admire from far the prefectures of Trikala, Karditsa and Arta. 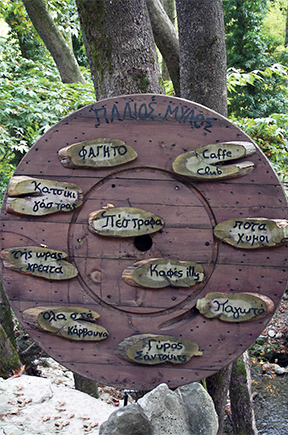 In the village there are also six unexplored caves (Vouzias, Papa Ragi, Vaeni, Znara, Bala and Fivas). Before we reach Kali Komi and then Petroto, in the middle of the route, we meet the Costianos Gorge. 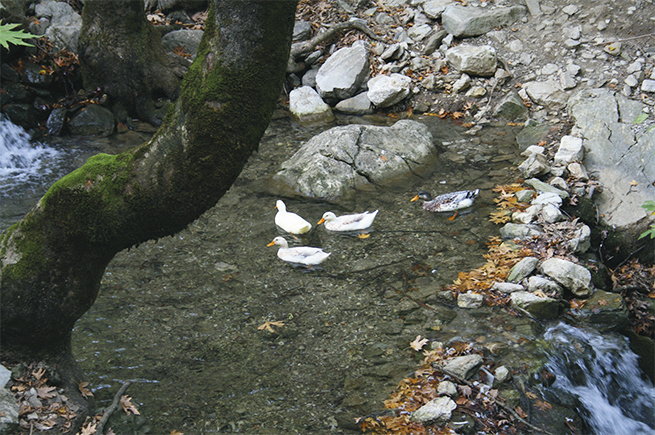 Crossing the gorge, when the water is low, can also be done on foot. The route takes place through towering rocks and ending at the river Acheloos, which is decorated with countless plane trees and white stones (hence the second name of the river "Aspropotamos" (White River). 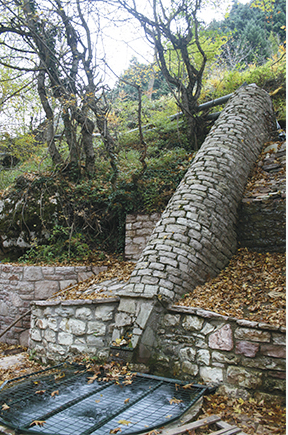 Here the locals came to wash their carpets and their clothes.

-On the way, I was informed about the love of the locals for the traditional songs and the traditional dances, something that is not so difficult to understand if one considers the ease with which the feasts are set up in the villages of Argithea. Most of the time there is no need for some important reason.

Anthiro is built at 900 meers altitude. From here, do not forget to buy honey from fir, but also during your stay to try traditional plasto (pie with spinach other vegetables). 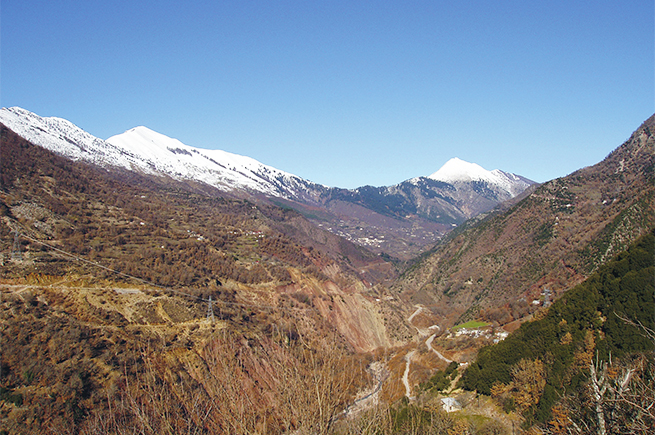 The time for the return trip has come. After a long journey we found ourselves in the beautiful city of Karditsa.

The truth is, that not many years ago, Karditsa was different from the current city. Its squares were never tidy and the park Pausilipo was not well kept. At that time Lake Plastira was not so well known, at least not as a tourist destination, but either you wanted to go to the famous lake or to Argithea, you had always to pass through the city. 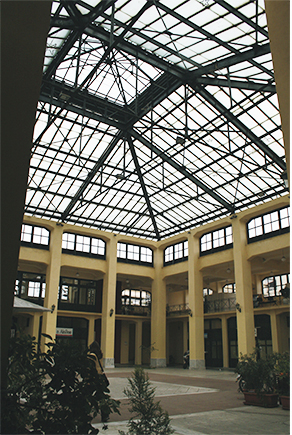 Indoor photo from the Municipal Market of Karditsa.

The years have passed and Karditsa has been transformed from an "ugly duck" to a "swan". The municipal market building is an elegant artwork. The park of Pausilypo, clean and beautiful, faces the statue of Karaiskakis which is overlooking the square in front of it. 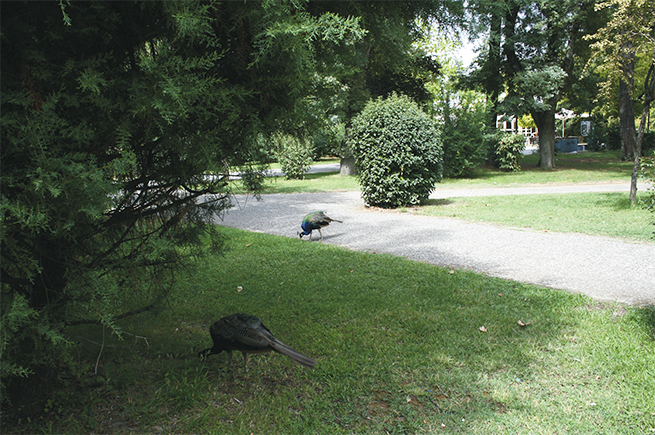 Old wonderful neoclassical buildings have been refurbished without losing their nobel character, while the pedestrian are soaked by people and playing children.

Karditsa has changed, and it is a pleasure to go through the center, look around at the shop windows and sit at one of the numerous cafes and bars. 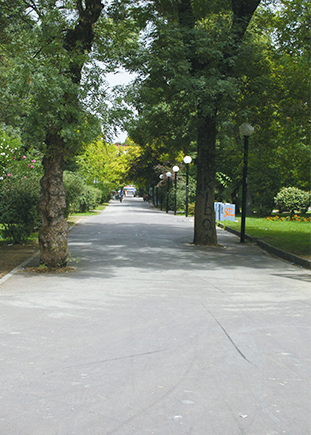 Another progress-innovation of this city and at the same time an example for other cities, are the cycling roads. The municipality of Karditsa, wishing to contribute to the change of the attitude of the citizens, created municipal outdoor parking spaces.

Leaving the cars there, they get a bike for free to move to the center for their jobs. Well done! 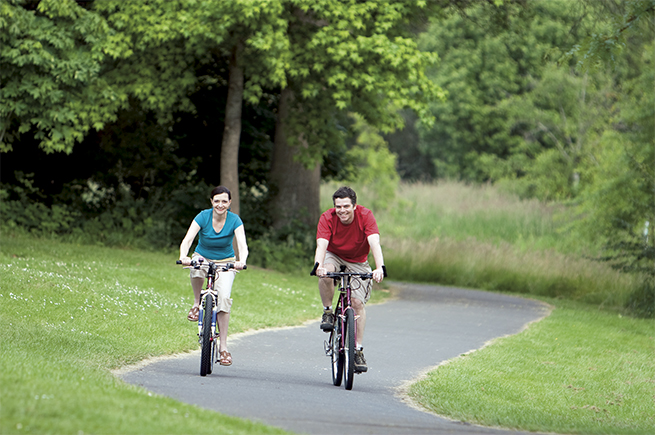 I get in the car and I say goodbye to the beautiful Karditsa listening to Iggy Pop`s song «I am the passenger and I ride and I ride ...», realizing that this place has touched my heart.