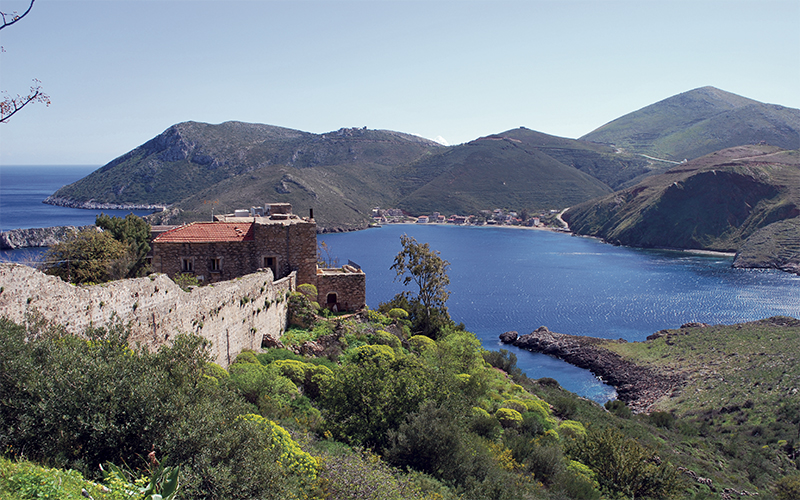 Messinian Mesa Mani: Aposkiaderi, a unique place with a rough beauty. This trek from Areopolis to Kavos Matapas, on the edge of Prosiliaki Mani, is just a sneak peek. A glimpse of Mani`s land before it is lost in the vastness of the sea.

In the old days, Mani was called "Land of Aposkiaderi” or “Big Algiers”, as the Maniots were assaulting the ships that were passing by, for the purpose of robbery. Men, women, old men and children fell all together in the water, sometimes with small boats, sometimes cunningly swimming in the darkness, stealing the crew and the merchandise. They were called Kakavoulides, the pirates with the iron beanies. The ships were lured into a trap when they were approaching the shores. After covering the lighthouses with sails, they were leading them on the rocks. They had nothing more to do, as the earth was rough and rocky.
Katerina Karizoni: From her book "Big Algiers" 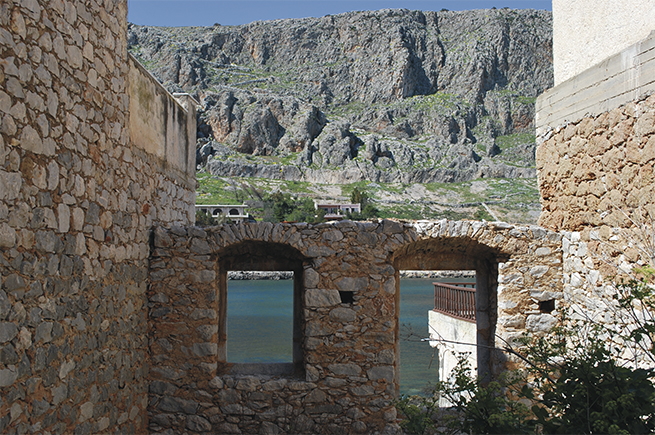 Gerolimenas: Sea view and the secret path of the rock

How to get there: By car from Athens via Sparta, Gytheion, Areopoli (275 km). From Areopolis to Vathia 37 km.

And the trek begins in Areopolis, on horses in Pyrgos Diros and boating in the Caves

The first stop is in Areopoli, which in the old days was called Tsimova (25 km from Gythio), the capital and the pride of Mani, where the national parade takes place on 17th of March every year. We walk in the cobbled streets with the magnificent restored tower-houses, we sit for a coffee in the big square and then we go downhill to the junction (6.5 km) which leads on the right after 4.5 km to the famous Diros Caves and on the left continues to Pirgos Diros, entering into the heart of the land of Kakavoulides. 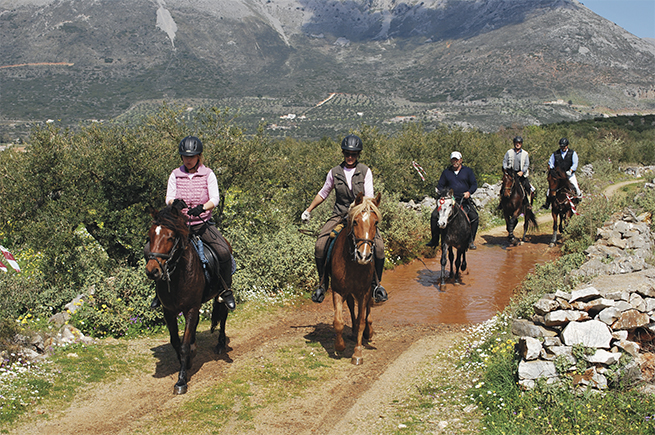 About 100-200 meters after the junction to Caves, it is worth visiting the Equestrian Center, < Mani's Horses> by Giorgos Sampatikakis and Michalis Diakoumakos and enjoy a wonderful horse ride through magnificent trails, the tower houses of Haria, the cobbled streets, the Byzantine churches and to the beach with the caves. Those of you who are stubbornly denying this wonderful horse ride, the traditional café and the amazing landscape that surrounds the Equestrian Center are the ideal places for you to wait for the return of your riding friends.  Or if you want (better not in the middle of the tourist season) you can visit the famous caves and enjoy boating on the underground sea routes.

Our walkway brings us along Diros Tower and Triantafyllia on the road that leads to Gerolimenas. In this course with the scattered small settlements, however, the traveler should make small detours to the alleyways that descend to the sea and find himself at hidden small beaches along the rocky coastline. Like the one that leads to the protected bay and the beach of Mezapo, a fishing village opposite Tigani peninsula, just before Cape Grosso. 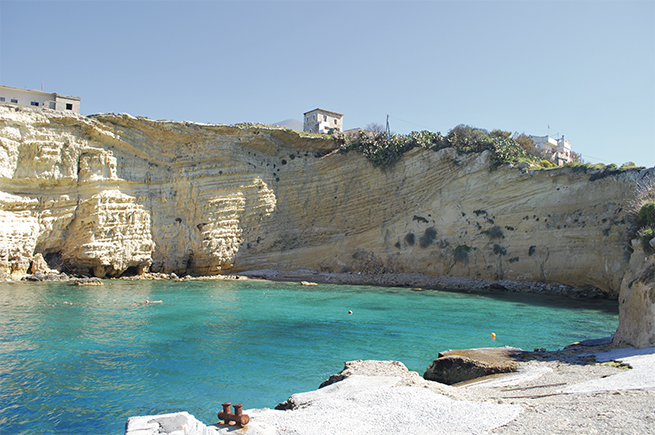 A trekking route (45-60 ') starts from Stavri, just below Mezapo, and reaches the ruins of the Frankish castle in Tigani. The view from there to the slopes of Saggia and the Mani settlements with the towers and tower houses is unique. Saggia defines the area of Aposkiaderi Mani, which is located on the western side of the end of the mountain range of Taygetos. Saggia has been classified as a "botanical paradise" because it is an important biotope for migratory birds and birds of prey and it has a rich flora and numerous hiking trails. 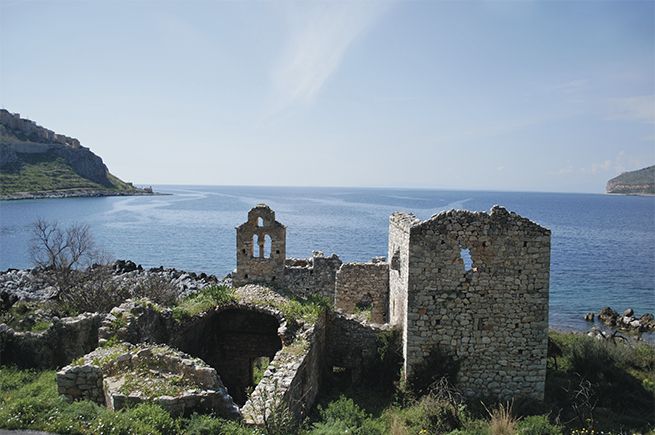 On the way to Limeni

Continuing our route, the road brings us to the seaside village Limeni, a small bay with crystal clear water that keeps its authenticity. The fresh fish at the edge of the waves is really fresh! Then, with a small detour, we find ourselves at the touristic village Gerolimenas, which has the same latitude as the Strait of Gibraltar. Here is the starting point of the touristic boats line which approaches the entire coastline of Mesa Mani and also part of the Adriatic Sea.
The isolated fishermen’s village in the cove has lost some of its erstwhile beauty as the urban sprawl has made also here hits appearance. In the old settlement on the left side of the bay are the yet kept picturesque homes of the fishermen with the hooks abandoned to rust in the yards and the slides for the fishing boats. Its jewel is the beautiful mansion-hotel KYRIMAI which reminds that once Gerolimenas (Holy Port) was the most important commercial port of Inner Mani thanks to the business smartness of a Syrian merchant and of Kyrimi, a merchant at that time and mayor of Mani. 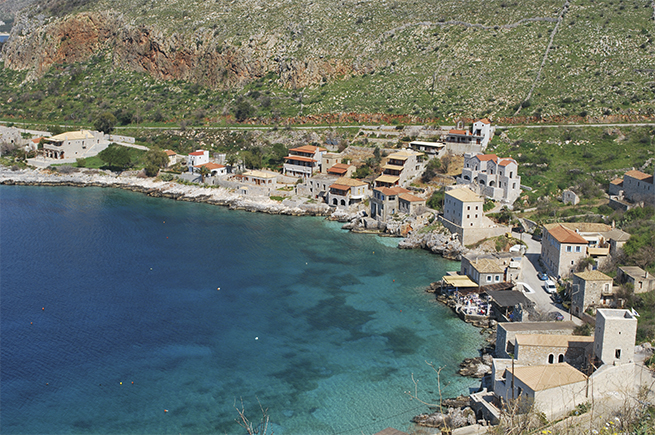 We continue our way going south passing by small harbors with small beautiful beaches which are surrounded by high cliffs, such as Gyalia, Alikas, Almyros until we reach the beaches of Kapi and Exo Kapi, the seaports of the unique Vathia. From here, we ascend the winding road until we see the fortified settlement of Vathia emerging from the top of the hill, with the towers, the housetowers, the cobbled streets, the churches, all embraced tightly in order to resist the strong winds that hit it from the open sea and the wild mountains. This panoramic settlement is the epitome of the Mani architecture in all its grandeur. A museum like settlement, which despite the efforts of the Greek National Tourism Organization (EOT), which restored the abandoned settlement and converted many of the villas into traditional hostels, was finally left to decay. Vathia’s beauty is hard to be described. The landscape loving traveler must come here either in winter or in summer, but early in the afternoon, at the time that the shadows become longer and the scenery is colored up by the last rays of the sun. 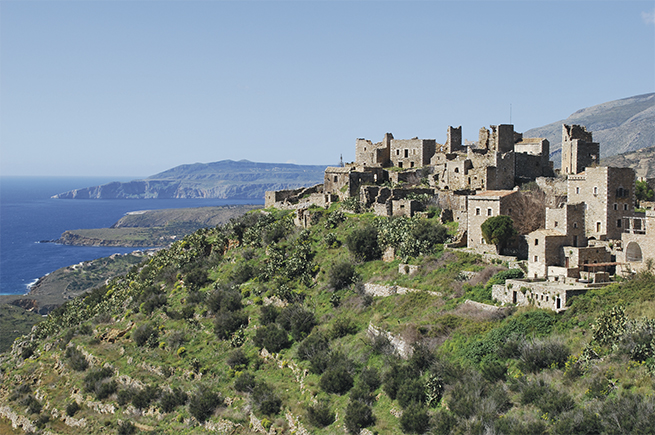 From Marmari to the pirates' beach or the lighthouse

Continuing our route we reach the three roads junction before Marmari where we can turn right down to the three beautiful beaches of Marmari or take the uphill road that takes us to Prosiliaki Mani with two alternative routes. The one that crosses the cliff and above the col reaches Achilleion with its castle and the magnificent view and the other that heads down to Porto Cayo, at the beach of the pirates, with the fish taverns next to the waves and the fresh fish. 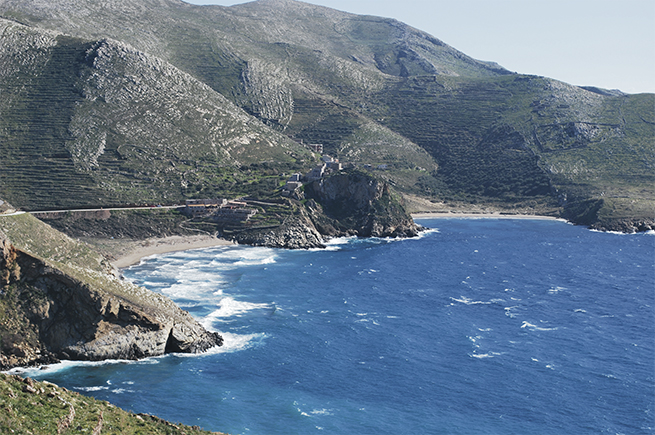 The third road reaches up to the edge of Kavos Matapas (Tainaros), where its paths with the stonewalls and the wild rocks, lead to the temple of Asomata, to the cave temple of Poseidon, the necromancy and the Gates of Hades, the ruins of an ancient settlement and its beautiful lighthouse. 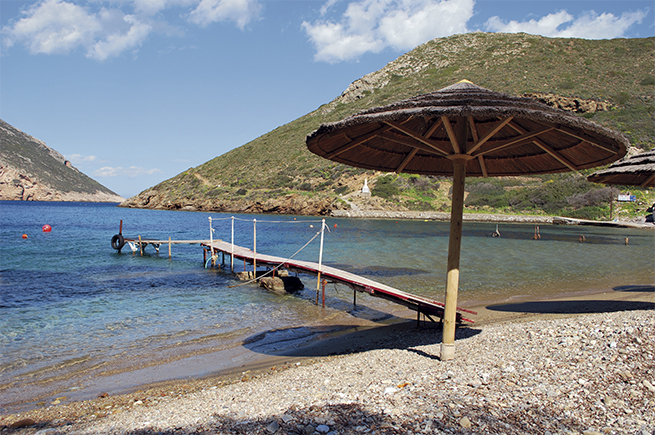 At this point, it is time to pull away our smoldering gaze, having just touched the secrets of this rough but captivating land.