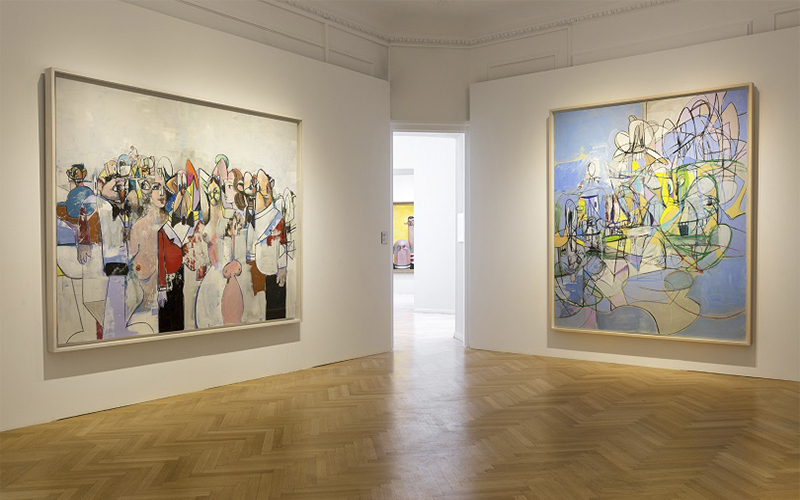 George Condo presents a new suite of self-portraits created in 2017 and exhibited for the first time at the exhibition in Athens “There are characters that live within your mind and I want to bring them to light. If you think about how the mind as opposed to the eyes see people, that is the image I want to create.” “I think the whole act of making art has nothing to do with the medium within which you work… You can paint, draw, write, etc., but the act itself always remains the same.” “This is a painting. It’s not a fake painting, it’s a painting from an imaginary character’s reality. That’s why I work with a cast of characters, all created carefully. As each of them becomes real, so do their environments, their place of being. Sometimes, I think they even come from some imaginary character’s mind.”  George Condo

The Museum of Cycladic Art hosts the exhibition George Condo at Cycladic, George Condo’s first large personal museum exhibition in Greece, from June 8 to October 14 in the Stathatos Mansion. The exhibition presents a total of 30 works -including paintings, sculptures and drawings - which span the past 20 years of the artist’s career. Exhibited for the first time at the exhibition George Condo at Cycladic is a series of paintings and drawings created in 2017, including a new suite of self-portraits titled Self portrait in Paris 1-3 (2017) and Me, Myself and Him (2017). 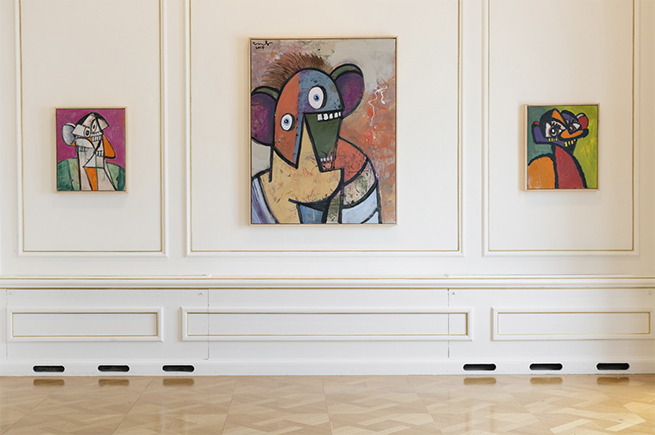 Condo, along with Jean-Michel Basquiat, Keith Haring, and Jeff Koons, was instrumental in reviving figuration in America in the 1980s and is considered one of the most important American figurative sculptors and painters to this day. He belongs to a generation of artists who had to work their way backwards into realism, seeing that at the time, in a post Abstract-Expressionist landscape, figuration had been put on hold while conceptual art and minimalism were at the forefront of artistic practices. Balancing between the beautiful and the grotesque, the mundane and the absurd, high art and commercial ‘pop’ art, Condo’s fresh artistic creations make of him one of the most inventive artists of his generation. 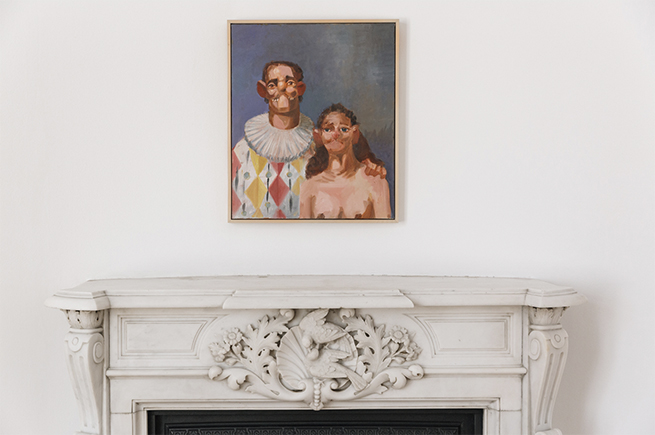 The exhibition George Condo at Cycladic aims to showcase the references, ideas, and mastered skills collected by the artist over time. Condo’s work, infused with deep literary, musical and art historical knowledge seems to be a reflection of his character, an extension of himself: charismatic, grand, insightful, cultivated, elegant, and with a great sense of humor. Cheeky grins, goggle eyes, rows of teeth, and budding heads—whether in black ink or in bursts of yellow, green, purple and orange—make up the figures of Condo’s frenetic world.

The exhibition includes, among other works, the sculptures Totemic Personage (2012) and Nude on Wine Crates 2 (2016), in which fragmentation and reconfiguration appear as integral to Condo’s work and Internal Space (2005), which proves that a work of art can be both representational and abstract. The paintings Homeless Harlequins (2004), Grinning Harlequin (2005), and Laughing Priest (2004) showcase Condo’s characteristic practice of recording the daily absurdities of life through a cast of characters that inhabit his mind, leaving behind his very own commedia dell’ arte. Paper Faces (1997) is a monumental work in which Condo brings together a number of characteristic motifs of his work.

The exhibition is curated by Atalanti Martinou and is accompanied by a bilingual catalogue. Guided tours of the exhibition will be organized every Wednesday at 11.00 (in English) and every Thursday at 19.00 (in greek). 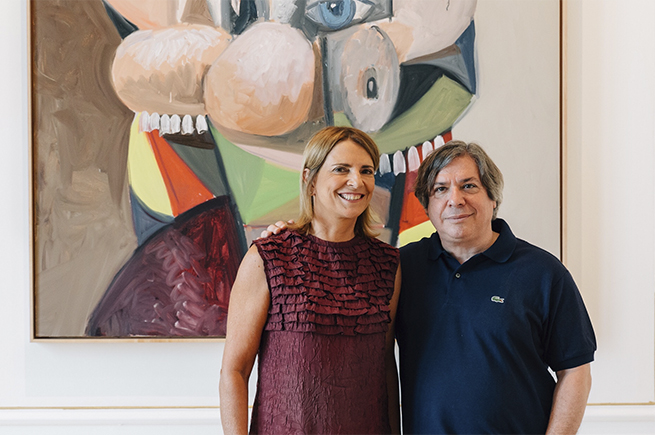 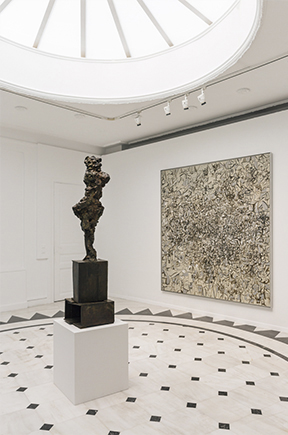 The figure has been at the center of artistic exploration and practice since prehistory. Looking at artifacts of the Cycladic culture (c. 3200 – c. 2000 BC) from the permanent collection of the MCA it becomes apparent that Cycladic society was primarily anthropocentric. As Cycladic culture flourished in the Early Bronze Age, images of everyday life were captured in figurines such as the cupbearer, the harp player, and dancers, now in the MCA’s collection. Today, Cycladic culture is etched in the minds of people across the world in the unique, iconic form of the Cycladic figurine. 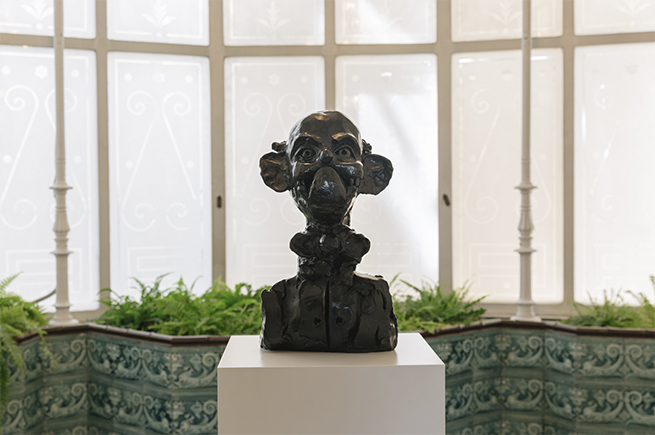 Condo’s practice is rooted in the representation of the self or, as he puts it, one’s “many selves”, referencing the art, philosophy, and literature of the past. Playing with both time and iconography, Condo has looked to Greek Classical art, seventeenth-century Dutch old master painters, as well as Francisco Goya, Diego Velasquez, and Pablo Picasso among others.

Condo documents the absurdities of contemporary daily life: the banker, the priest, our own twentieth and twenty-first-century middle class and clergy. In his very personal and singular iconic manner Condo ignites in our mind entire stories about each of his protagonists. The very physiognomy of his subjects is studied and exploited materializing into a new form of portraiture, which evidently combines elements of Cubism, Surrealism, notions of high and low art, abstraction versus figuration, and often the grotesque side of life; for the ultimate goal to portray the complexity of the human mental state of our times.

Within his works, characters assemble from all walks of life, in all sorts of mental states, giving us a peek into Condo’s mind—an immense bank of references, ideas and mastered skills, collected over time.

A few words on George Condo

George Condo was born in Concord, New Hampshire in 1957. He attended the University of Massachusetts, in Lowell, where he studied Music Theory and Art History. His art can be viewed as a multilayered experience that brings the viewer in touch with a psychological exploration of human nature. Through the process of transformation involving art historical language and an actualization of philosophical content, Condo’s paintings create a visible window into the world we live in. 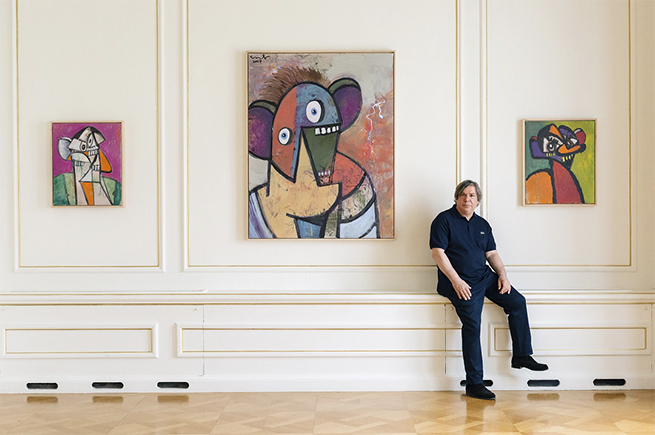 Mr. Condo has been invited to lecture at many prestigious institutions including Columbia University, Yale University, Pasadena Art Center, San Francisco MOMA, The Solomon R. Guggenheim Museum, New York, and the Metropolitan Museum of Art, New York. Mr. Condo taught a six-month course at Harvard University entitled Painting Memory. In 1999 Mr. Condo received an Academy Award from the American Academy of Arts and Letters; in 2005 he received the Francis J. Greenberger Award; in 2013 Condo was honored by the New York Studio School; in 2018 he was a BOMB Magazine 2018 Anniversary Gala Honoree.

Condo was recently the subject of a major retrospective of works on paper titled The Way I Think at the Phillips Collection in Washington D.C, in early 2017, which travelled to the Louisiana Museum of Modern Art in Denmark in the Fall of 2017. In 2016 Condo’s work was the feature of amuseum-wide exhibition, Confrontation, at the Staatliche Museen zu Berlin – Museum Berggruen, Berlin, curated by Udo Kittelmann. In 2011, the New Museum, New York presented the retrospective exhibition, Mental States. This exhibition travelled to Museum Boijmans Van Beuningen, Rotterdam; Hayward Gallery, London; and Schirn Kunsthalle, Frankfurt. George Condo is represented by Skarstedt Gallery, New York and Sprüth Magers, Berlin.

For more information: Press Office of the Museum of Cycladic Art
Lida Karanikolou, Head of Press Office | E: This email address is being protected from spambots. You need JavaScript enabled to view it. | T: +30 210 7228321-3 (ext. 114)