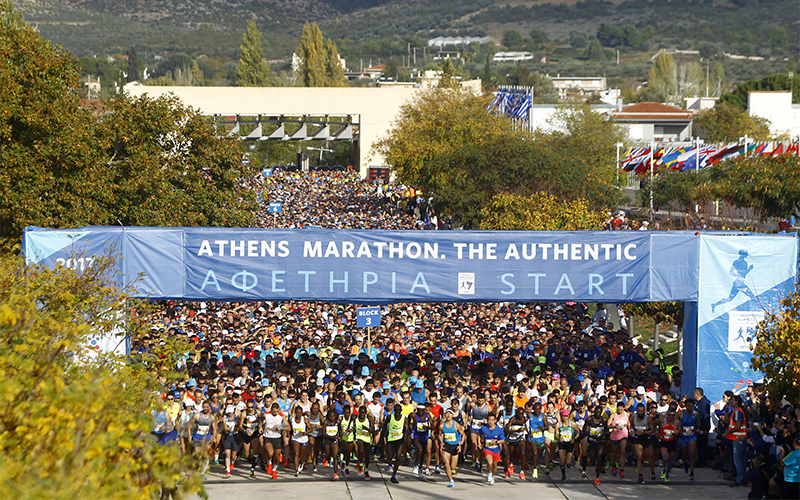 8-11/11/2018: Athens is transformed for four days into the global center of the runner movement!

8-11/11/2018: Athens is transformed for four days into the global center of the runner movement!

122 years from the first Marathon, the 36th "Marathon Athens, the Authentic” is a contest inspired by the path of the Athenian hoplite runner after the Battle of Marathon. In spring 1896, the first modern Olympics, athletes from five countries were lined up at the Marathon bridge and ran the dirt road to the Panathenaic Stadium.

Greek athlete Spyros Louis won the race and his victory symbolizes till today the effort to overcome the physical and mental limits. Greek experienced runner, Charilaos Vassilakos, finished second at the race and along with Louis became the first two Olympians in the Marathon history.

The Marathon race became one of the most popular events around the world, with millions of friends and participants. Another important event is celebrated this year: in 1946 the best Greek runner Stelios Kyriakides won the Boston Marathon, achieving one of the greatest victories in the Greek sport history and offering at the same time lessons of humanity and national awareness.

The Athens Marathon, the only race that has the privilege to be performed on the original route from Marathon to the Panathenaic Stadium in Athens, is an emblematic event for any lover of the long distances. It has been carried out in its present form since 1983 and is dedicated to the great Balkan pacifist Grigoris Lambrakis.

This year the Athens Marathon movement and the entire world will celebrate the 2.508 years of the historic battle in Marathon, in 490 BC, which is considered to have saved the civilization of Europe - a defeat of the Greeks could have changed the flow of history.

The unprecedented victory was followed by the remarkable accomplishment of the Greek soldier-runner-messenger, who ran from the battlefield of Marathon to Athens to announce the Greeks victory and then collapsed from exhaustion and died.

Historical accounts do not mention with certainty the name of the messenger, and the modern historians set forth only speculations, yet his legendary run became an Olympic sport, in 1896 and gave birth to the Marathon Race, which was held during the first modern Olympic Games, in Athens.

Subsequently, the sport became a social movement, due to the rapid growth of the Marathon Race, worldwide and particularly in Greece, following the historical “Marathon Peace March” of the Balkan pacifist, Grigoris Lambrakis, in 1963.

The 36th Athens Marathon, The Authentic, which is held in memory of Grigoris Lambrakis since 1983, is hosted under the auspices of the President of the Greek Democracy since 2006, transforming it gradually into an international vehicle of social solidarity and brotherhood.

SEGAS every year puts into practice the 37 year of experience and organizes parallel to the Marathon Race important events that transform Athens for four days into the global center of the runner movement.

Municipalities along the Marathon Course

09.15'-10.20': Kids’ Fun Runs NATIONAL BANK OF GREECE - along the Marathon Course
♣ Races finish 15’ before the 1st Marathon runner arrives at each Municipality Athens City Center - Vas. Sofias Ave. (in front of the Parliament)

20.00'-22.00': Official Farewell Reception for the AIMS Marathon Symposium Participants, SEGAS, AIMS and Region of Attica VIP Guests offered by the Mayor of Athens

Parallel Events of the 36th AMA

The 36th Athens Marathon, The Authentic is a 4-day event, which besides the aforementioned events also includes the ones established in recent years, namely:

• The «ERGO Marathon EXPO» (Thursday 8 to Saturday, 10 November), which will be hosted at the TaeKwonDo Indoor Hall & Exhibition Centre, is a large exhibition on Sport and Tourist products and services, staged parallel to the AMA Registration Centre.

The exhibition is co-organized together with Attika Region (Prefecture) and produced by “Be Best” company.

• The 12th AIMS Marathon Symposium
The AIMS Symposium, supported by the National Tourism Organization and co-organized with Attika Region (Prefecture), is an annual international seminar established in 2007 by AIMS, SEGAS, IAAF and the Municipality of Marathon, which hosted the event the first eight years at the venue of the historic start of the race, the eve of the Athens Marathon race.

This Symposium brings more than 100 representatives of other international marathon races to Athens every year. Specifically, the theme of this year’s AIMS Symposium to be held on 10th November 2018 at the Hilton Athens Hotel is “General Data Protection Regulation ("GDPR"), Implications and impacts on running events”.

• The Athens Marathon Opening Ceremony (12:30, Saturday, November 10), supported by the National Tourism Organization, takes place inside the archaeological site of the Marathon Tomb and leads to the Lighting of the Marathon Flame, a new symbol of AIMS which annually travels around the world reminding to people the values of the Marathon Movement.

The last few years, the Flame has already been hosted in 4 Continents; in America (Boston, Chicago, Toronto, Quito, Ottava and Mexico City), in Asia (Shanghai, Xiamen, Vomvai), in Europe (Belgrade, Genoa, Prague, Omsk, Vienna) and in Africa (Maritzburg City, as well as in North Pole, hosted by the Antarctica Marathon)

• The Road Races of 5km (Morning & Evening) and 10km WIND, 3km ERGO, 1.200m for Special Olympics athletes and the 1.200m NATIONAL BANK OF GREECE for kids, organized (on Sunday) parallel to the Marathon Race and introducing team and family registration options; The signal to the start of the 5 & 10km Road Races, outside the Panathenaic Stadium, will be given by the Mayor of Athens, along with the Secretary General of SEGAS.

The City of Athens, through its Youth and Sports Organization (ONA), is the most important collaborator/partner of AMA, member of AMA’s O.C. and co-organizer with SEGAS, of the Half-Marathon of Athens, in Spring; The signal to start the Athens Marathon Race at Marathon will be given by the Head of Attica Region, along with the President of SEGAS, the Mayor of the city of Marathon and the president of AIMS.

The Attica Region, as well as the Municipality of Marathon are the most important partners of SEGAS for the AMA and co-organizers of a series of pivotal events of the AMA, such as the AIMS Symposium, ERGO Marathon EXPO, Opening Ceremony, the travels of the Flame around the world, the Marathon Race start.

The Hellenic Athletics Federation (SEGAS) has launched a project, named “Runners Forest” to help revive parts of the Marathon route that were devastated by the recent wildfires. With this project, the 36th “Athens Marathon, The Authentic” honors the memory of the victims of the disaster and aims to send a message of optimism and hope.

The project will raise funds, from event sponsors, partners and the Greek athletics community to complement the initial contribution from SEGAS, through the National Bank's crowd-funding electronic platform, www.act4greece.gr which will be used to buy and plant trees along the marathon course.

Decisions about the kind of trees to be bought and where and when they should be planted in public areas would be co-ordinated with official state agencies and relevant experts. This scheme is separate from renovation projects already organized and being carried out by the Greek government.

Runners taking part in this year’s “Athens Marathon, The Authentic” will also have their chance to promote awareness of this project. On race day, November 11, each participant will be given a green bandana or headband to wear when they run through the burned-out areas around the village of Mati. The aim is to create a “Runners’ Forest” of a green revival in the aftermath of devastation.

One of most successful initiatives is the voluntary recycling program for plastic bottles given to runners. This year, the “GREEN TEAM” of the “INSTITUTE TEAM FOR THE WORLD” is supported by ELVAL COLOUR. More than 1.500.000 plastic bottles have been collected during the implementation of the program and recycled along with other packaging materials with the collaboration of the Hellenic Recovery Recycling Corporation.

The "LET THEM RUN AGAIN FOR A GOOD CAUSE" initiative aims at collecting slightly used sports shoes. With the assistance of the Attica Region, the donated sports shoes are promoted to our fellow citizens in need.

The program for the collection of sportswear will be also “running” at the start of the Marathon. Also, printed material from previous Marathons will be used for the creation of new upcycling items such as handbags and caskets by a group of refugees.

This way, material that cannot be recycled is being used and repurposed and the newly arrived citizens are supported in their social integration and the provision of living resources.

It is worth mentioning that AMA is among the international running events that apply the “Association of International Marathons and Distance Races” (AIMS) standards for eco-friendly sport.

The “INSTITUTE TEAM FOR THE WORLD” is the AIMS scientific associate in this field.

The volunteers, who will participate at the Athens Marathon, will be involved in various areas both during the preparation of the event and on the day of the race, Sunday November 11th 2018.

• 3.300 volunteers will be actively involved in the 36th Athens Marathon which makes a new record for the event;
• The eldest volunteer is 84 years old;
• The AMA attracts volunteers not only from the city of Athens and from all around Greece, but this year from foreign countries (14) as well;
• In 2011, public schools jointed for the first time the AMA volunteers program and few years later, companies and universities also joined the cause;
• There are volunteers, who offer their services for more than 10 consecutive years;