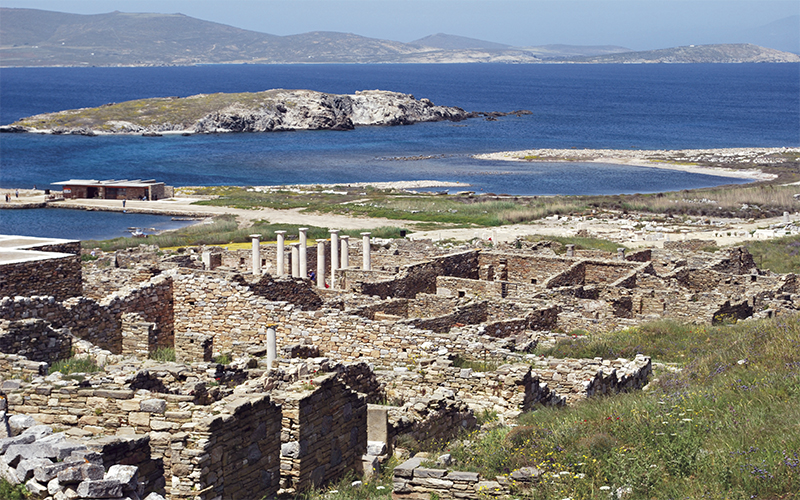 Two neighboring islands in the center of the Cyclades, Delos in the ancient world and Mykonos in the modern world, seem to be destined to attract people and gods as a magnet.

"The few hours that boats remain on the island are not enough to enjoy the light of this unique space. A minimum stay of at least two days is recommended to the hasty visitor and a week as a relatively good time for a good acquaintance with the island “ says Dr. Fotini Zafiropoulou

Delos is a small island of the size of a rocky islet, southwest of Mykonos, or Mykonos is the closest island to the islet of Delos. It depends on how you look at it!  Two islands wrapped in the veils of myths. Mykonos is the island of entertainment and life style, for the VIPs, for the high society, for the wealthy, young and youthful of every sex and race of our time. Delos is the island of mythology and a claimed historically center of power, wealth and trade, covered with the veil of sanctity from the ancient world. Making a short stopover on the way to Mykonos in order to visit Delos is something like a short joke, unless you belong to the class of archaeologists or fanatical enthusiasts and researchers of ancient culture. My trip, therefore, started from Mykonos and had a stopover in Delos, as I do not belong to any of the above categories. 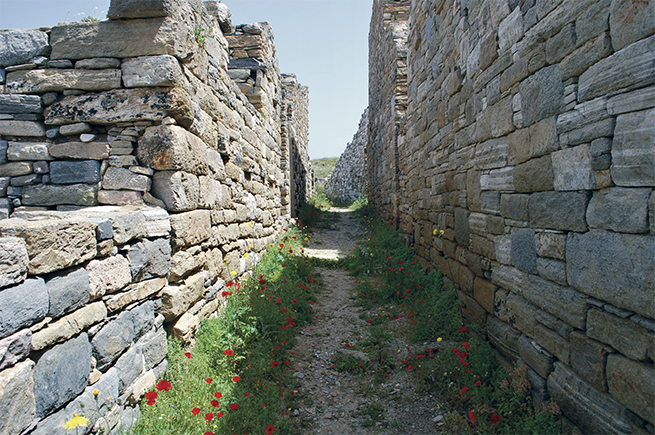 Alley in the neighborhood of the Theater.

Delos-Apollonius... this is not just an island!

A good myth always starts with Jupiter's... mischief, which almost always has two effects: first, Hera's (goddess of consciousness) acute nervous crisis and secondly, the birth of a new god or demigod, after Jupiter`s mad pursuit and seduction of α goddess or a mortal girl.
In the case of Delos, the seduced girl was Titanida Leto and her descendant ascended to the level of a god. Hera, who as a goddess, did not have to wait for the DNA test to figure out what had happened and after the first shock of the news, she hunted the pregnant Leto with all her fury. In the end, Leto managed to find shelter on a piece of rock in the sea after promising to Hera that she would never go back! However, as Hera was still angry, she let Leto suffer labor pain for nine days, keeping the goddess Eileithyia (the protector of the women in labor) hidden, until a well-known... «bribe» did its miracle. A beautiful necklace "persuaded" the goddess Iris, a well-known mediator to the gods, to bring Elyithyia to Leto, who gave birth to two offsprings! Hera was not the only responsible for the labor pain of Leto, but also the twins she was carrying: Apollo and his twin sister, Artemis. While Apollo was an artist, interested in music, piano, poetry, dances and festivals, his sister Artemis was a tough creature, the hunter and the ever virgin. So, after the birth of the gods (and the recognition by their father) the island was established and named Delos, meaning “the obvious”. 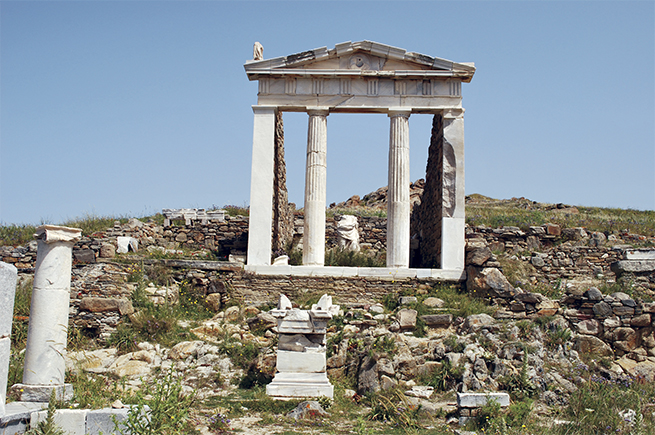 The temple of Isis from the side of Kythnos, looks upon the sea.

And from then on people came and settled on the island, taking advantage of the ancient myths and gods!

Traces of the earliest settlement on the island date back to the middle of the 3rd millennium BC and according to Thucydides, belong to one of the prehistoric population of the Aegean sea, named Cares. In the next millennium, as in other Cycladic islands, every trace of human presence got lost. The first sanctuary of Apollo is known from the Homeric times. The first Mycenaeans, in the late of the15th century BC, having established their dominance in the Aegean Sea, give the first acne on Apollo`s island and create a small but thriving settlement around the main harbor. Ionians follows, who come from the mainland Greece, to settle in the islands. 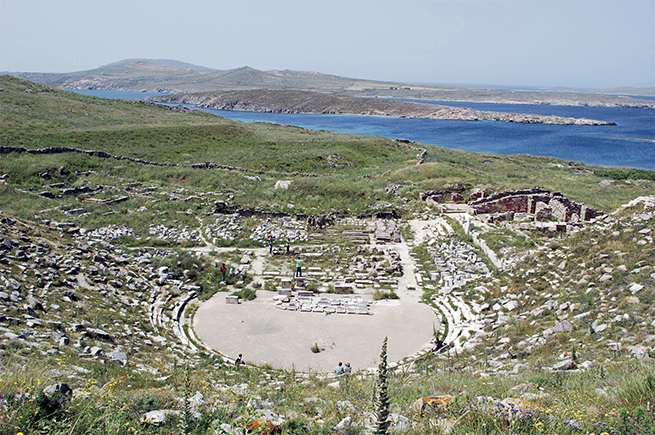 The theater from above.

Delos becomes known as the holy center of the Ionians and is established as the holy center and place of worship during the Ionian`s "Great Synod" and of course, along with the pilgrims, the merchants are coming too. The reputation of the island with the religious fame and therefore with political influence as well as the famous commercial harbor, attracted many aspiring sovereigns, each of whom in his own way, tried to obtain either spiritual or economic domination or even influence on the island, through the priesthoods. Naxos, Paros, Samos were some of the islands that made many tributes and created important buildings on the island. The Athenian Hegemony in the region, even in periods of recession during the Persian Wars and the Peloponnesian War, holds up until the domination by the Macedonians. It is restored shortly after the dissolution of the Macedonian hegemony, when Rome, making its appearance at the forefront of the ancient world, defeats the last king of Macedonia Perseus in Pydna. However, in this period Delos is an Athenian colony under the control of Rome. 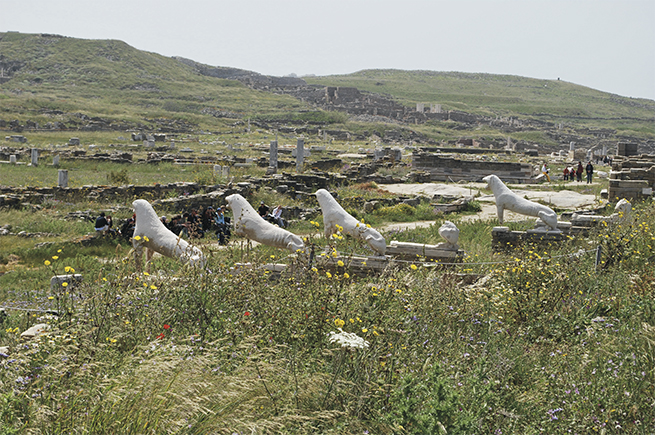 The lions of the Naxians -  the "trademark" of the island.

At the beginning of the 1st century BC, foreigners, such as Italians, Egyptians, Syrians, Phoenicians, Palestines and Jews, flock to the island. The result was the flourishing of foreign mainly Eastern, religions in Delos. Nowadays, the visitors of the island Delos, see the ruins of the city, which was developed mainly after 166 BC, when the Romans declared the port of Delos tax free. Rich merchants, bankers, ship owners from all over the world, settled on the island and with them a number of craftsmen and artists, pointing out Delos as"the largest shopping center of the world".
It is estimated that in the 1st century BC, this rocky island of only 5 km long and 1,300 m in width, was inhabited by 30,000 people and that in its harbors it was possible to trade 750,000 tons of merchandise every year. However, the wealth that was gathered on the island and the friendly relations of Delos with Rome, were the main cause of the disaster that had taken place. Delos was destroyed and looted 2 times in 88 BC and 69 BC by the king of Pontus, Mithridates and his ally, Athinodoros. 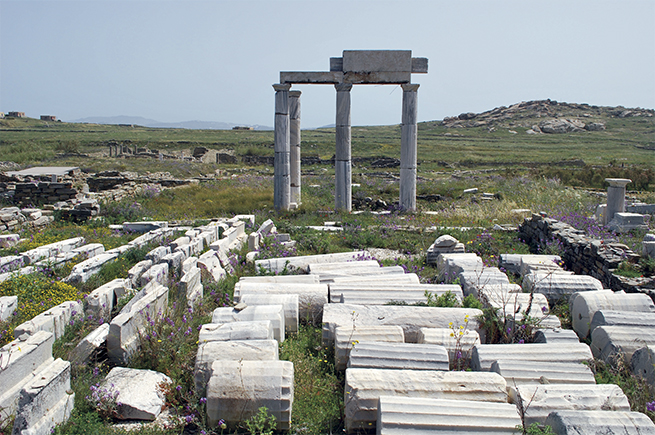 The columns of the Poseidoniasts Establishment.

A tour of the archaeological site 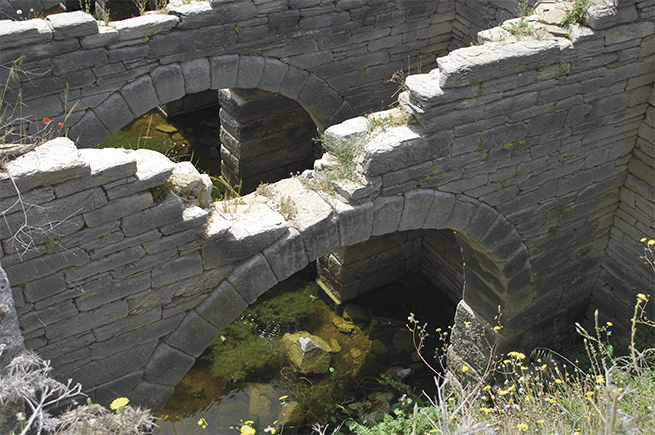 The Theater's Tank, a work of the 3rd century BC.

You need time to get to know the island

I end this article for Delos with the very correct comment of Dr. Fotini Zafeiropoulou, written in her very informative book, which is available at the Delos Museum: "The few hours that boats remain on the island are not enough to enjoy the light of this unique space. A minimum stay of at least two days is recommended to the hasty visitor and a week as a relatively good time for a good acquaintance with the island".
And one of my own remarks: how to describe such a place in such a small set of words!

The island is beautiful, especially in the spring, when blooming wildflowers next to, in and on the ancient marbles, create a magnificent picture. 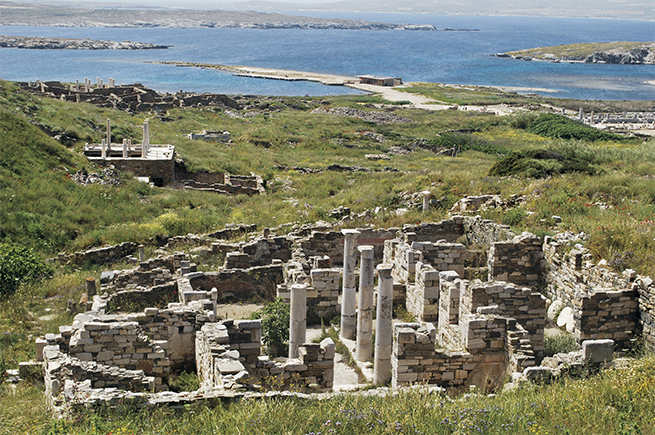 PS: Special thanks to Mr. Panayiotis Daktylides, owner of the very good hotel "Aeolus" in Mykonos, for the generous hospitality and the service he offered me!

Note: Delos visits are made with small tourist boats from Mykonos on fixed days and hours.