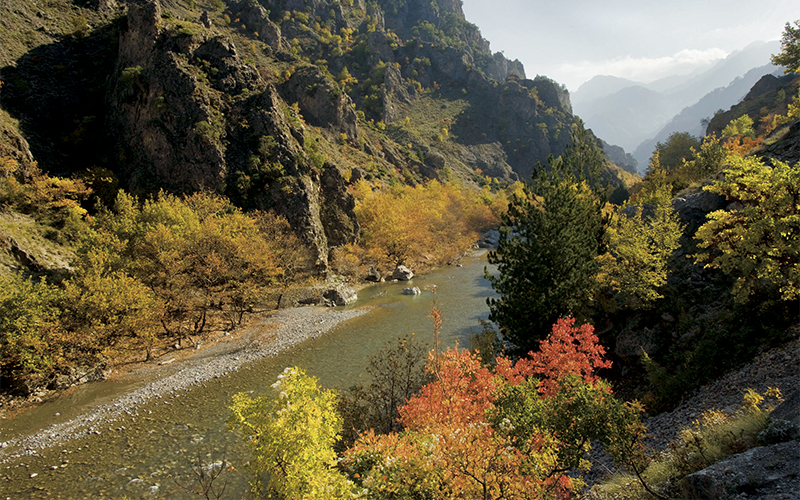 We walked in these unique canyons in autumn and we had an experience so beautiful that is hard to describe in words. We have also found out, that in autumn, this stunning corner of Greece seems like a fairy tale…

Steep cliffs and gloomy canyons, giant mountain peaks and rushing rivers give us a thrilling wander in Vikos-Aoos National Park, at the northwestern tip of the prefecture of Ioannina. Discover the wild beauty of the Aoos river and the crystal-clear waters of the Voidomatis river, having in the background the warm colors of autumn and next to you, the sparkling waters of the rivers.

How to get there:

From Athens: Through the National Road of Arta - Ioannina. From Ioannina continue north to Konitsa - Zagorohoria. Through the National Road of Athens-Lamia. You turn to the bypass to Domoko and towards the route Karditsa-Trikala-Kalambaka-Metsovo-Ioannina. From there you will continue to Konitsa.
From Thessaloniki: Via Egnatia Highway up to Kozani. From there you continue and at the junction Milia, turn to Neapoli-Pentalofo-Konitsa. Alternatively, you arrive to Grevena and from there you follow an eastern course with several turns that crosses the Aoos Valley. You arrive in Konitsa via Distratos. 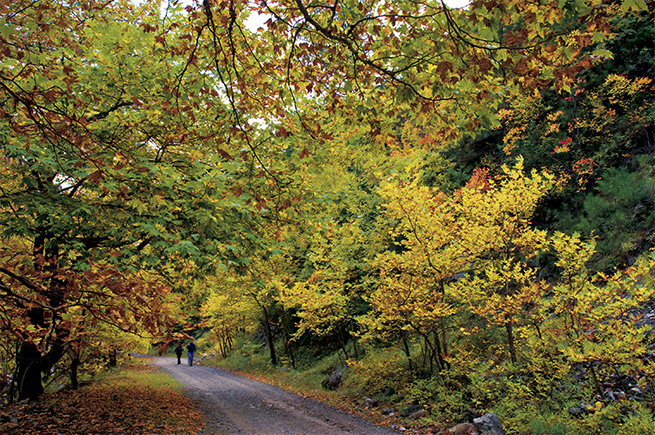 Enjoy a refreshing walk through the dense forest along the Aoos river.

At the stone bridge of Konitsa, the serene waters of Aoos, sparkle under the glowing morning sun. The river flows through a golden-green, dense forest and disappears where the towering peaks of Tymphis mountain range blend. We are in the gorge of Aoos, at the northern end of the magnificent Vikos-Aoos National Park. In this great ecosystem of the Prefecture of Ioannina, in addition to the Aoos gorge, there is the magnificent gorge of Vikos with the river Voidomatis, the cleanest river in Europe, that flows into the gorge and a part of the mountain range of Tymfis. Within the core of the park, are the villages Vikos, Monodendri, Papigo and Mikro Papigo, and in the perimeter are another six beautiful villages named Zagorohoria, built with their unique Epirus architecture.

Early in the morning we visited Konitsa, the beautiful border town of Epirus, built between imposing mountains and at an altitude of 630 meters. Our destination was the historic stone bridge of Aoos, the trademark of Konitsa. Its image travels you back in time, when the craftsmen from Pyrsogianni (50 men with starmaster Zioga Frontzo) worked the stone with great care and skill to complete this wonderful example of Epirus architecture in 1871 (after 48 years of hard work). It is no surprise that it is the largest one-arched bridge in the Balkans since it has a height of 20 meters and an arc span of 40. 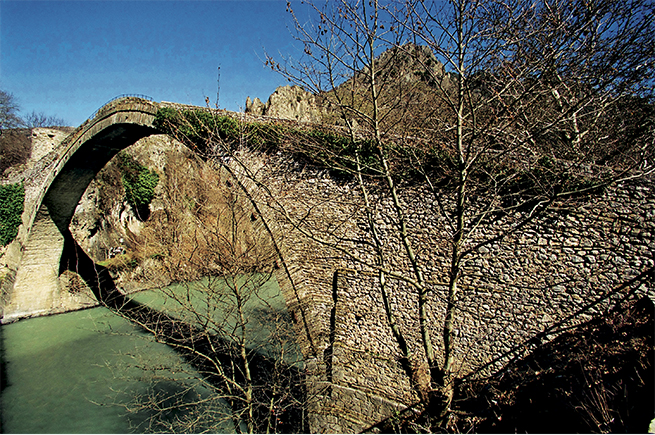 The wonderful stone bridge of Aoos in Konitsa is the largest one-arched bridge in the Balkans.

We climbed to the top of it, observing the slightly tilted landings, made in this way, to help climb. In front of us was a magnificent spectacle: the Aoos water lane is in absolute harmony with the golden-yellow foliage of the trees, while the outline of the imposing peaks of Tymfi is revealed at the horizon with every detail.

We followed the marked path that starts from the bridge along the river and head to the ravine. Walking, we felt the magic of the forest surrounding us. Sometimes, the dense foliage of the huge plane trees leaves small openings to the river. In other places, the view of the river is generously appreciated, and the gorge opens between vertical slopes. Steep rock formations rise up in the sky and sometimes descend to the river. There are several places where you can go down to the river and enjoy the water, looking up to the imposing rocks which look like hanging above your head. 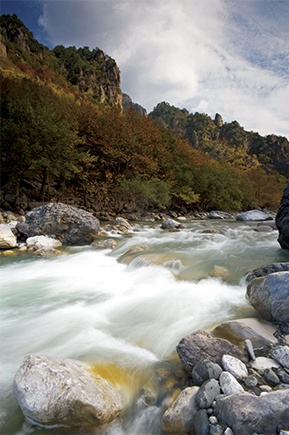 Along the way, Aoos becomes more impetuous, revealing to us his wild side. White and greyish stones in the turquoise waters, make up a unique setting. A stunning color feast (from warm orange to glittering golden-green) is dominant everywhere.

The scene alternates continuously, while the dirt trail narrows in several places, leading us even closer to the majestic peaks. At some points, we cross narrow passages alongside the rushing waters of the river. On the opposite bank, the rugged slopes provoke us with their wild beauty. 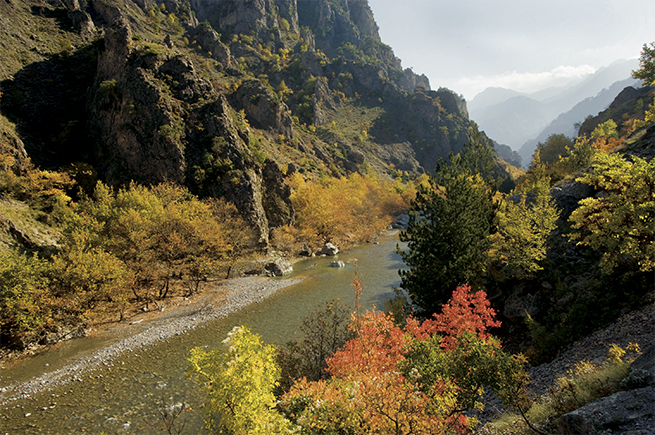 A colorful feast in Aoos gorge.

After two hours of hiking (in the middle of the gorge) you will reach the Monastery of Stomio (1774). It is a worthwhile route, as the view to the verdant slopes and of Aoos gorge is just stunning. Near the Monastery you will find the beautiful waterfall of Gravos. From there, those who are able to continue the hike, follow the path towards Vrysochori and climb up towards the Karteros passage, in order to reach to the top peak, named Gamila (2497 m).

-Aoos is known for a variety of river activities, since rafting and kayaking- canoeing in its white waters, is a real enjoyment.

Next to the bluish waters of Voidomatis

Next day, our mission is to meet one of the cleanest rivers - if not the cleanest - of Europe, the famous Voidomatis (from the Slavic "Voido-mat", meaning "good water"). Known not only for its crystal clear waters but also for its momentum, the river passes through the gorge of Vikos at a length of 10 km. Specifically, it flows out from Vikos gorge (between Vikos and Papigo village) and meets Aoos in the plain of Konitsa. 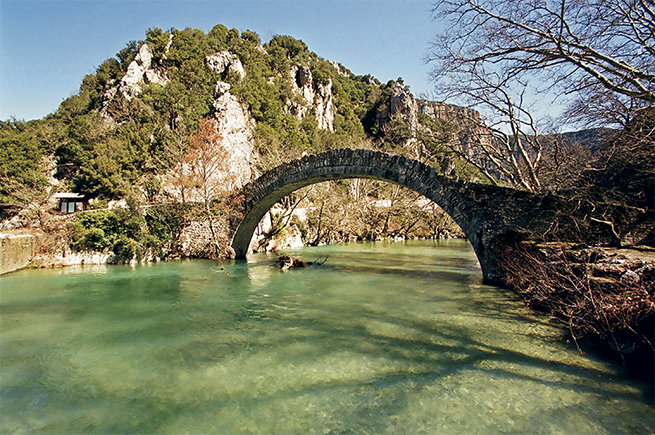 The one-arched stone bridge of Voidomatis was built in 1853.

Our route starts from the beautiful, one-arched bridge of Voidomatis, built in 1853 near the village of Kleidonia at the place the tributary of Aoos, Voidomatis, flows out from the wild ravine of Vikos to the plain of Konitsa. Nature all around captures the look from the first moment. We follow the path along the bank towards the monastery Spilaiotissa. The huge plane trees accompany our steps, while the golden-yellow and reddish leaves on the path create a colorful carpet. 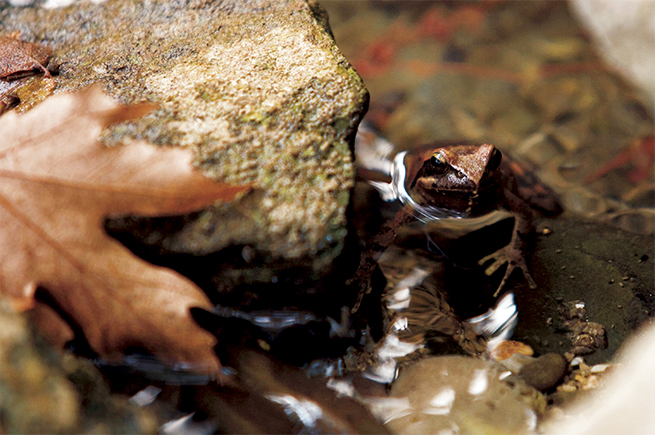 Dozens of species of amphibians and fish are found in Voidomatis.

The crystal clear waters of the river enchant with their intense blue color. Voidomatis flows away through dense vegetation of plane trees, willows and other aquatic plants, composing a scenery of rare ecological value. In some places we see small blue-green ponds with yellow leaves travelling on their calm waters. The sounds of the river soothe the soul and the spirit. It looks like we are in a terrestrial paradise, far from any urban reality. 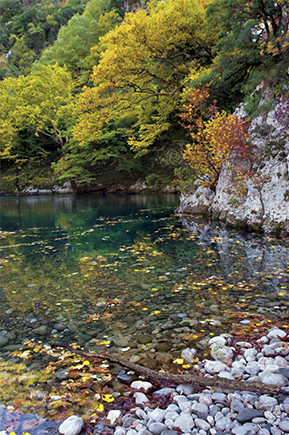 An idyllic scenery is created by a blue-green lake with its bluish blue color, next to Voidomatis.

A dip in its crystal clear waters is extremely tempting. But we suggest that you think twice, even if you are here in the summer months, as the waters have a constant temperature of 4 degrees Celcius throughout the year. However, we cool down drinking from the crystal clear waters of the river, as Voidomatis is one of the few rivers whose water is drinkable. After a short route, we arrive at the monastery of Panagia Spileotissa (1579), built on the top of a cliff overlooking the incomparable beauty of the river. 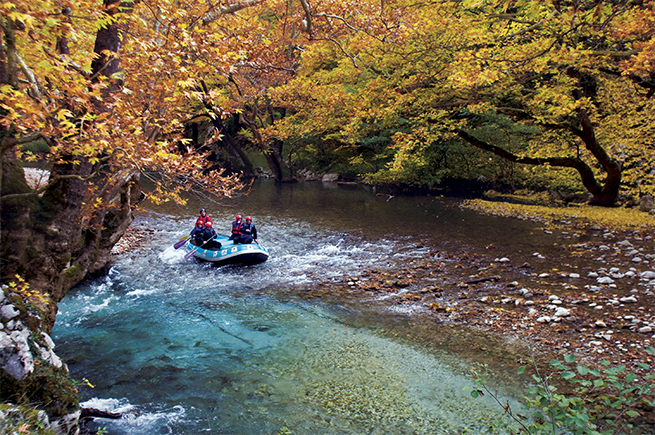 A very exciting experience is the Voidomatis descent with inflatable boats.

The Vikos-Aoos National Park extends to the north-western part of Pindos, in the mountainous complex of Tymfi. The area was proclaimed as a National Park in 1973. It consists of the 34.120 acres around Vikos gorge and the 93.000-acre area, which includes part of the Aoos river gorge. It borders with Pindos National Park (Valia Calda), which is a natural continuation. At the core of the park are the villages Vikos, Monodendri, Papigo and Mikro Papigo.

Vikos gorge (900 m deep), one of the country's natural wonders, is the deepest gorge in the world after the Grand Canyon of the United States. It has a total length of 12 km and the river Voidomatis flows inside. The maximum height of the gorge is 1,100 meters, while its average opening is approximately 200 meters. At its narrowest point, the canyon has a width (opening) of only 2 meters. In fact, it is a ravine, but it has prevailed to be called a gorge. 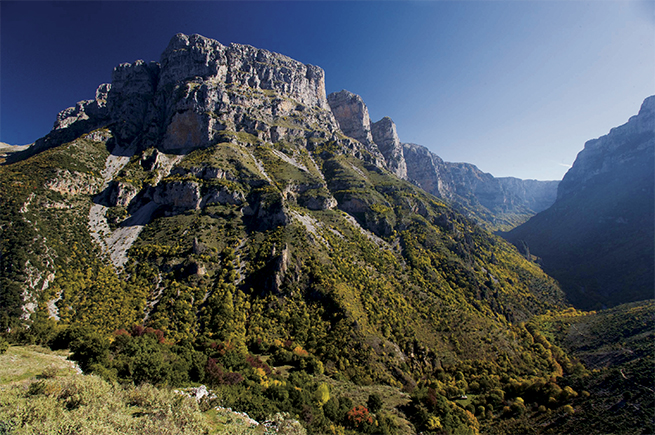 The magnificent Vikos gorge, 900 m deep, is the deepest in Europe.

Drymos is also known as "The Forest of the Great Peaks". Its highest peak is Gamila (2497 m altitude) named after its peculiar shape. Other great peaks are Astraka, the Great Litharia and Karteros. The vegetation of the National Park is rich and includes firs, pines, rompola, beeches, oaks, willows, cedars, maples, wild chestnuts, linden trees, plane trees, as well as many shrubs and wildflowers.

Vikos is famous for its herbs, therefore the area was formerly also known for the "Vicodoctors" (practical therapists). The exceptional ecosystem of the river offers shelter to many species of animals and birds, such as wolf, wild boar, deer, otter, squirrel, woodpecker, thrush, osprey and many others.