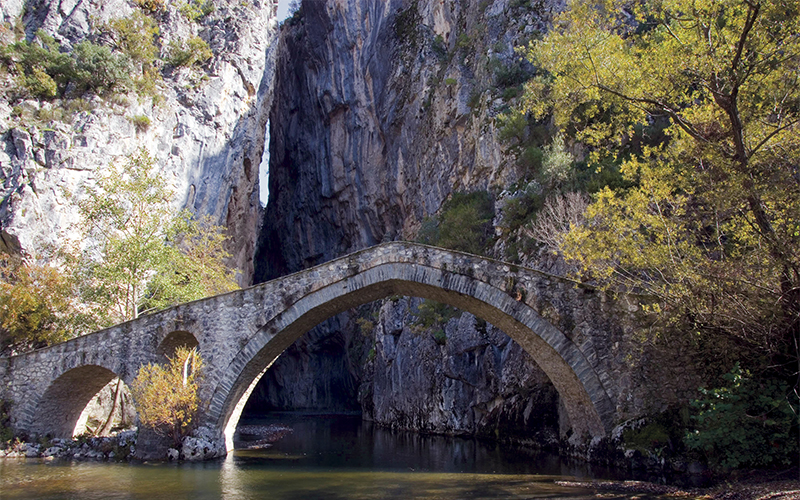 Surrounded by imposing mountain tops, Valia Calda is a unique monument of nature. Follow the traces of the bear and travel into a world made of dreams...

Indulge yourself in an adventurous wandering. Meet the natural bonsai of Pindos, as well as the magical herb of mistletoe, be introduced to the secrets of its rare creatures and walk alongside the legendary Arkoudorema river with its wild trout.

The exploration of the Pindos National Park has been a challenge for years. The famous Valia Calda, as it is rurally called, has reserved a life time experience for us that we have been eagerly looking forward to live.

Get to know magic herbs and ancient plants

Having as a starting point the Vasilitsa Resort Hotel, with a lot of mood and after a good breakfast, we set forth our journey to explore the magnificent Valia Calda. Luckily, the dense morning fog that covered everything began to recede, while we boarded on the 4x4 wheel drive car of Panagiotis.

At the junction to Vasilitsa`s ski center, we took the road to the villages of Panorama and Lavda, having as a destination the village Perivoli, from where we would enter the forest. As we cross an enchanting path with wooded slopes, a question grows in my mind.

Why did the locals name the area Valia Calda (=its rural name which means warm valley), since it is far from famous for its heat?

I learned that the reason is that in the Valley the temperature is 10 degrees Celsius higher than in the surrounding ridges. It is natural that the low temperatures prevail in the Valley, since it is at an altitude of up to 1,400 meters and is surrounded by magnificent mountains (Avgo, Mavrovouni, Milia, Pyrostia) with peaks exceeding the 2,000 m.

Of course, it is said that the frozen "Valia Calda" was named like this as a joke, since it is one of the coldest and wettest regions of Greece. 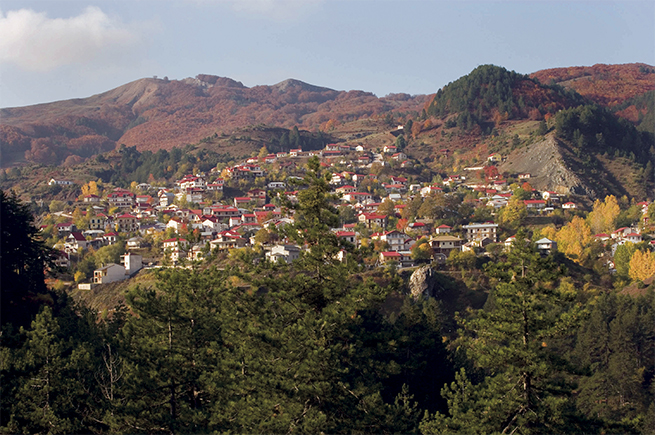 From the village Perivoli, our tour to the Pindos National Park starts.

Just 2km before we reach Perivoli (and when we see the relevant sign for the village), we leave the asphalt road and we turn left onto the dirt road. At this point, we make a first stop to enjoy a panoramic view of Perivoli, but also to get to know the Mistletoe plant, which we mistakenly identify as the ILEX aquifolium plant that adorns our homes during the Christmas celebrations.

The Mistletoe lives parasitically and grows on the branches of other trees (pine trees, fir trees, oak trees, chestnut trees). The mistletoe is a toxic plant which is mentioned at the ancient physician texts for its miraculous properties. Indeed, we know that the magical broth of the Galatians also contained Mistletoe. Equally magical, however, is the way of its reproduction. 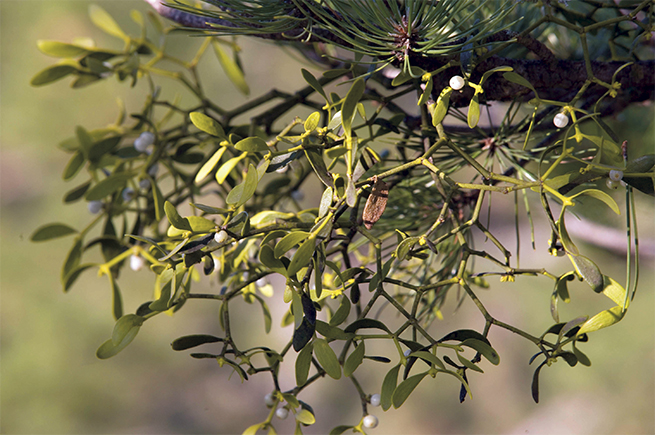 The miraculous Mistletoe, which grows on the branches of other trees, is one of the secrets that will be revealed to you in Valia Calda.

We are now moving to the Perimeter Zone of the Forest and our exploration is becoming more and more enjoyable. At every stop, we are acquainted with the unknown treasures of nature: the plant Juniper, the berries of which the liquor Gin is produced, a spiny plant known as the "chicken of the forest" because of its taste, the "Pinguicula plant" - the only carnivorous plant which catches small insects with its leaves and the Moly plant mentioned in Homer`s Odyssey. 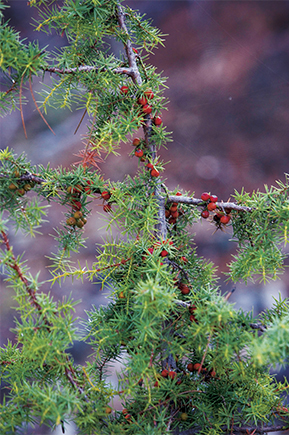 The liquor Gin is made from the fruits of the plant Juniper.

At each step, we come across to a variety of mushroom types, many of which are eatable and have a great taste. 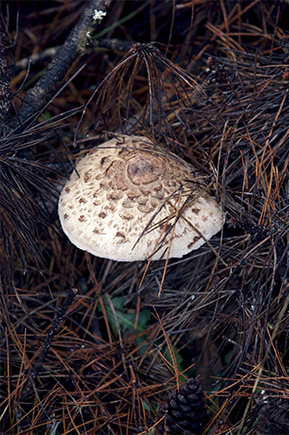 The delicious macrolepiota, as the locals call it, is one of the many types of mushrooms you will encounter in Valia Calda.

The way to Stavros site amazes us with the forests of Beech and Black pine trees. After reaching at an altitude of 1,400 meters, we continue to climb and now the dense forest is changing to a bushy and herbaceous vegetation of the subalpine zone.

On a turn, a magnificent pine tree, burned from a lightning strike, guardian of the passage for Valia Calda, stands in front of us. This giant tree with its straight trunk, is dying standing. 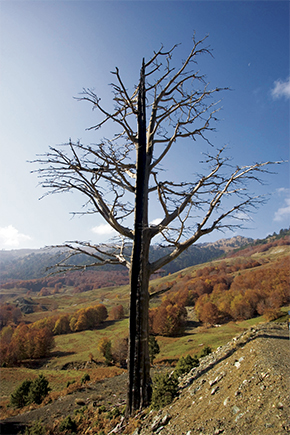 The lightning-stroke pine tree, trademark of the entrance to the Pindos National Park.

In the enchanting Arkoudorema river

We cross again dense forests until we reach Stavros (after 12km on a dirt road) and turn left for Valia Calda - Kokkina Pefka (there are relevant signs). Soon, the spectacular view of Valia Calda, nestled among verdant slopes that are hiding behind one another, forces us to make another stop. 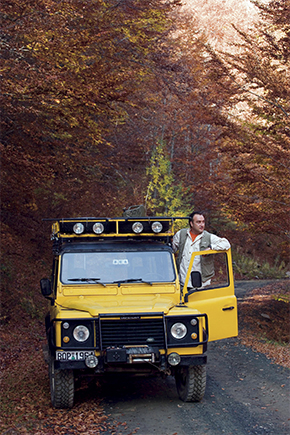 A little further down, we discover the famous natural bonsai of Pindos. We are impressed, observing pine trees 30 years old (as it is revealed by the number of their branches) which do not exceed 1-meter height! A phenomenon due to the overgrazing of the area. But this is just one of the many secrets which Valia Calda reveals only to the restless travelers like us. 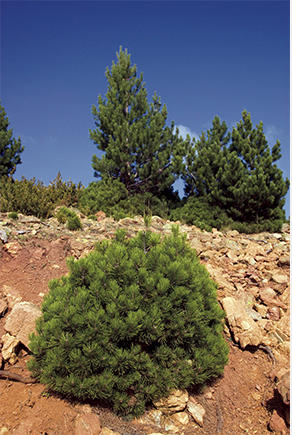 Did you know that Valia Calda has her own natural bonsai? A pine tree aged over 30 years old (as evidenced by the number of branches), with a height not exceeding 1 meter!

The road becomes more difficult, but we are astonished by the image of the over 40m tall pine trees. We are now at the core of the woods. In front of us emerges the mysterious dense forest.

The huge trunks of the black pine trees are lined up side by side, creating a foggy labyrinth. After 15 minutes’ drive on a difficult dirt road, we reach a beautiful location with lush meadows. We leave the vehicle and we start hiking in the dense forest accompanied by the roar of the stream Arkoudorema. 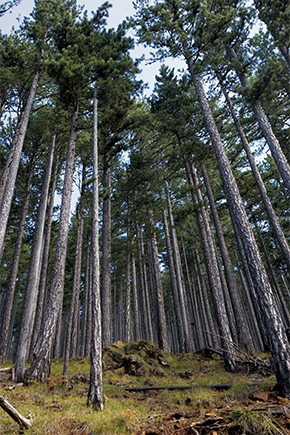 Soon, we see its crystal clear waters and we begin to descend a steep path to get to its shores. Although we have entered one of the deepest sites of the valley, we are at 1350 meters altitude.

A wooden bridge connects the two banks creating an idyllic landscape. Arkoudorema (bear`s stream) was not named accidentally. The brown bears who find shelter in Valia Calda descend into its waters to catch fish and frogs. It is therefore not unlikely that you will encounter its traces on the paths of the “Warm Valley”. 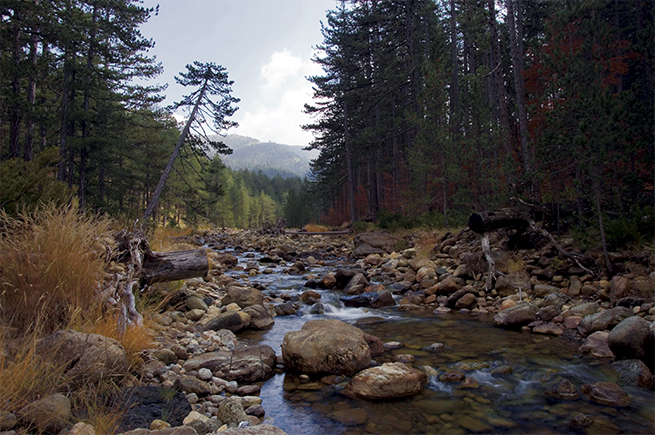 The legendary Arkoudorema river creates images of incredible beauty as it crosses the dense forests of Valia Calda to join with Aoos River.

In the river`s tranquil waters, you will notice the wild trout with the characteristic orange pearls on their sides, swimming with excellent agility. The Arkoudorema river flows swiftly within a dense black pine forest, forming small waterfalls. Suddenly it becomes calmer and continues his long journey to Aoos River.

Our look travels alongside its angry flow, stands on the black pines following the straight course of the imperious logs to the sky and gets lost in between the reddish foliage of a slim Beech tree. 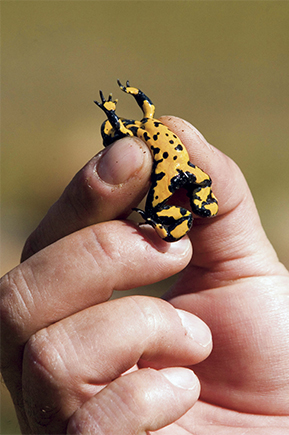 The yellow-bellied toad, with its distinctive yellow color on its abdomen, is one of the many amphibians that live in the forest and you can see at your visit.

We cross the bridge and continue our journey through the woods with innumerable shrubs around us. The roar of the stream is fading. The melodic singing of the birds and the majestic flying of an eagle above us, soothe our soul. 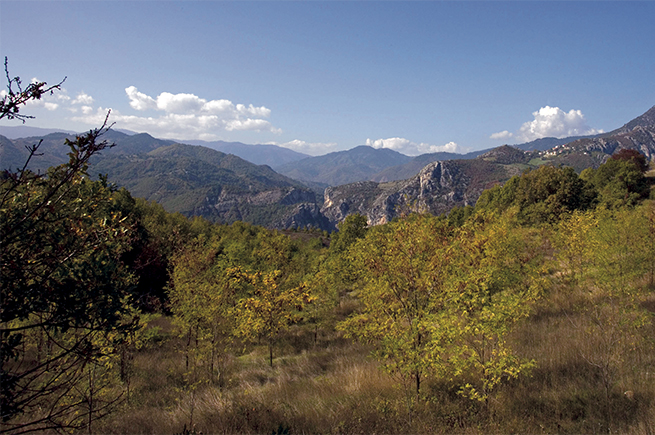 After a 15-minute hike, we reach a glade, surrounded by colorful mountain slopes. A little further beyond are the vast meadows where we left our vehicle. As the time has passed, our stay in the magical Valley has come to an end.

Dusk is the favorite time in Valia Calda, when everything comes to live. Rare creatures go out into the semidarkness in this wet forest, looking for food. These few hours, at dawn and at dusk, Valia Calda lives in its natural rhythms.

The Pindos National Park (Valia Calda) is a site of particular ecological value that is stretched in the northeastern part of the Pindus mountain range in the southern part of the Prefecture of Grevena. It is a total area of 69,000 acres, while its core occupies an area of ​​30,000 acres. Although it has been designated as a national park since 1966 and is one of the most integrated ecosystems in the country, its protection status is unfortunately not sufficient. 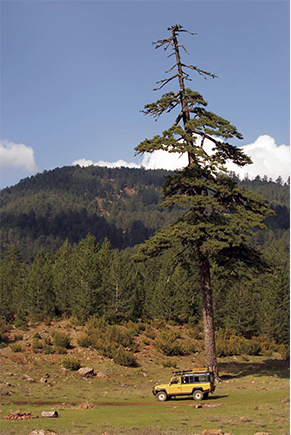 Alpine meadows and dense forests make up an ecosystem of unique ecological value.

It is a large, mountainous valley crossed by the river Arkoudorema, surrounded by the high mountains of the mountain complex of Ligos of northern Pindos, with peaks over 2,000 meters. Several small lakes are formed in the forest, of which the bigger two are Flegas (at 1.850 meters) and Lakkos in Avgo (at 1.600 meters).

At Valia Calda, extensive forests of Black pine and Beech trees are spread out, while Pinus Leucodermis and two small clusters of Scots pine, grow here. At this high altitude the subalpine meadows are covered by herbs and shrubs.

Valia Calda has a great ecosystem, since many species of fauna are found in it. The park protects 7 species of amphibians, 10 reptile species, 70 species of birds and 17 species of mammals. It is an important biotope for the brown bear, the wolf, the otter, the roe deer and the wild goat.

The Prefecture of Grevena is not only known for its famous Valia Calda. Every corner hides countless secrets: old stone bridges, picturesque rustic villages, roaring rivers and imposing mountains. Wherever your lodge is, you will find many interesting sights to visit. 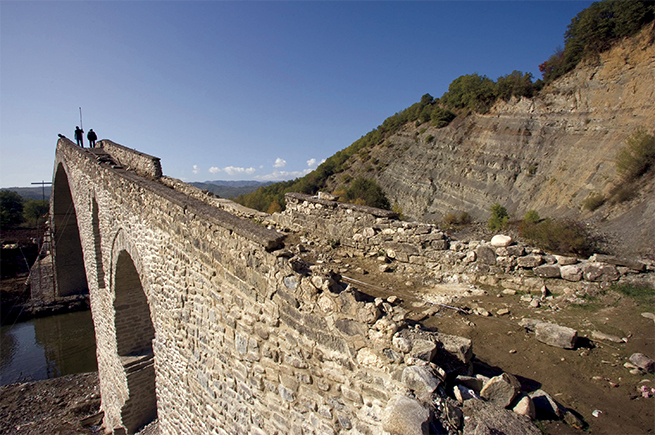 The stone bridge of Aziz Aga has 15 height and is the highest of Macedonia. 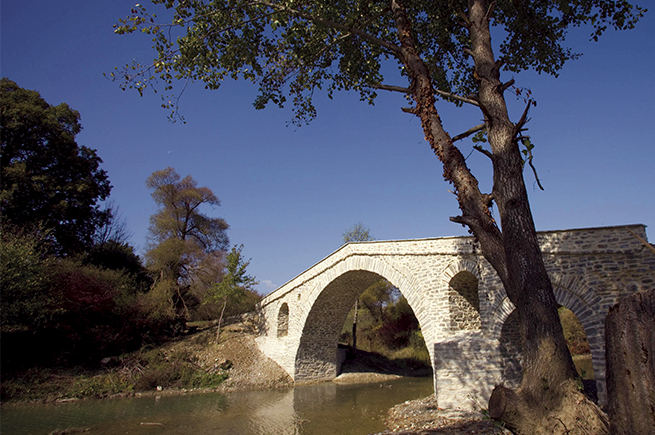 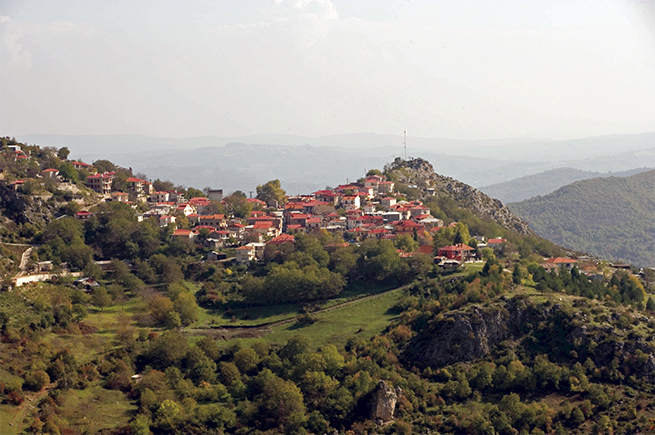 The picturesque village of Spyleo, perched on a verdant slope of Orliakas. 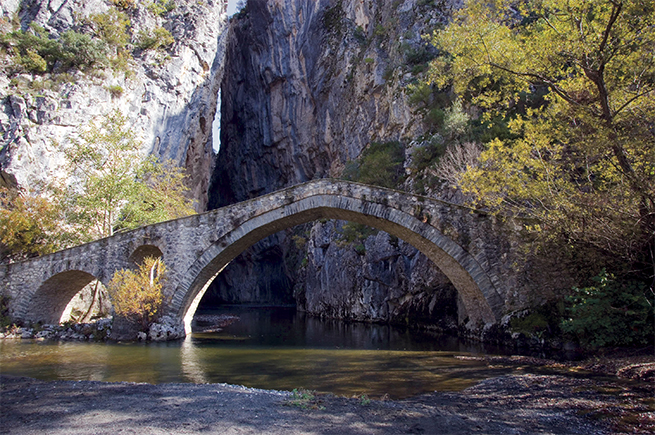 The bridge of Portitsa in the magnificent gorge of Venetiko. 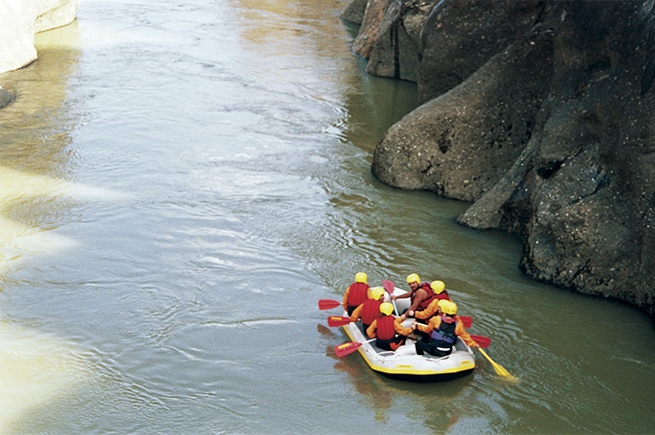 Sliding on the slopes of Vasilitsa Ski Center

Friends of skiing and not only, do not miss going for a visit to the national ski center of Vasilitsa. Its stunning location at an altitude of 1,600-2,100 m in the northwestern part of Grevena and its excellent infrastructure, makes it one of the most popular ski resorts in the country. 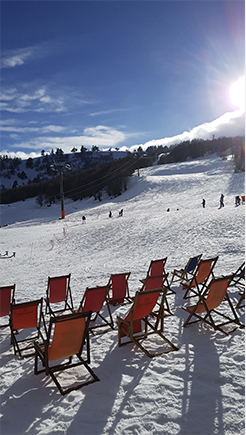 Walk through the amazing forests of Beech trees to get to its modern facilities. There, all you have to do is to use your skis and get down of one of its 16 slopes (from beginner slopes to sportive slopes), or climb up with the aerial or sliding lifts, to enjoy a unique panorama. There are also two baby lifts.

You can even cross the snowy forests and plateaus of the area with snowmobiles or simply enjoy the white landscape from the chalet. The ski resort provides ski and snowboard schools, shops where you can rent or buy ski equipment, chalets (with rooms to stay), a restaurant and a bar. Enjoy!