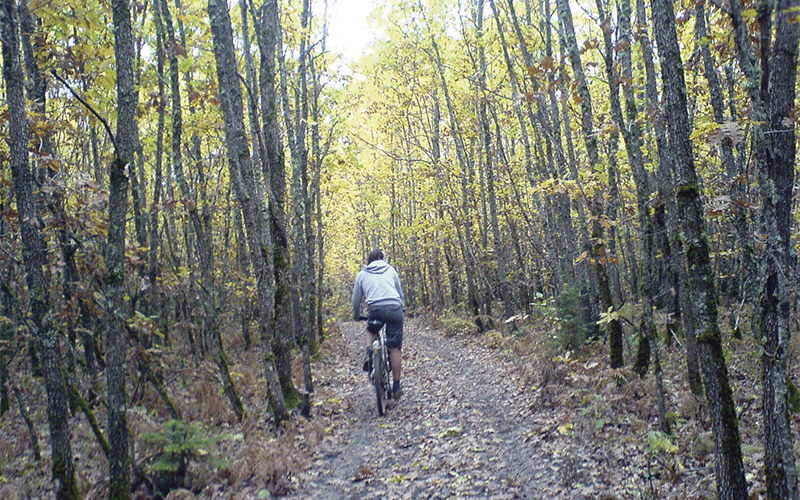 Lake Plastiras is one of the top locations in Greece for alternative tourism, offering to the restless traveler unlimited activities in nature. So we decided to spend a weekend there with our mountain bikes.

Since summer, we have been planning a cycling tour around the lake Plastiras, also called Tavropos Reservoir which is an artificial lake fed by Tavropos river and is located in the region of Karditsa, near the city of Karditsa. The lake is named after Nicholas Plastiras (a Greek general and politician) who in 1925 build a dam in the area. Eventually, in 1959 the project was completed and since then, with timid steps at the beginning, but mainly from the 1990s, the region has developed as a tourist destination.

At Athens, we loaded our equipment into our cars and after 305 km through Lamia, Domokos and Karditsa, we approached the eastern side of the lake at Plaz Lamperou. At this point, we parked one of our cars. The three of us rode our silent two-wheeled vehicles and the fourth was driving a 4x4 wheel drive car, with the task to encourage us and to track our route of 70 km around the lake. 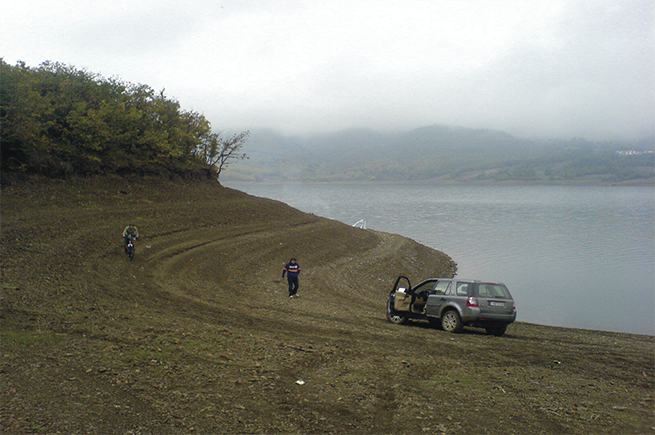 We started from the asphalt road heading south to the village of Agios Athanasios. At the end of the village, we chose to turn right on the dirt road to reach the lake.

We continued for about 3 kilometers. But we ended up in a dead end... We got back to the main road, and in the middle of the route, Dimitris shouted loudly that the car was stuck in deep mud, 10 meters away from the lake... We put stones and wood under the wheels and we pushed the car without result.

Fortunately, a good guy with the appropriate vehicle, who was fishing near the place where we were before, pulled our car out. We thanked him and went back to the road to continue the 20km route to the dam of Tavropos.

Due to our delay, we skipped the quick visit to the Monastery of Petra that was on our schedule, as we wanted to arrive at Kalyvia Pezoulas where we would camp, before night. From Plaz Lamperou, the route was quite upward till the highest point.

From there, we had a panoramic view over the whole lake, with the peaks of Agrafa being reflected in its waters. The lacy fjords of the southeastern part of the lake, were also impressive. 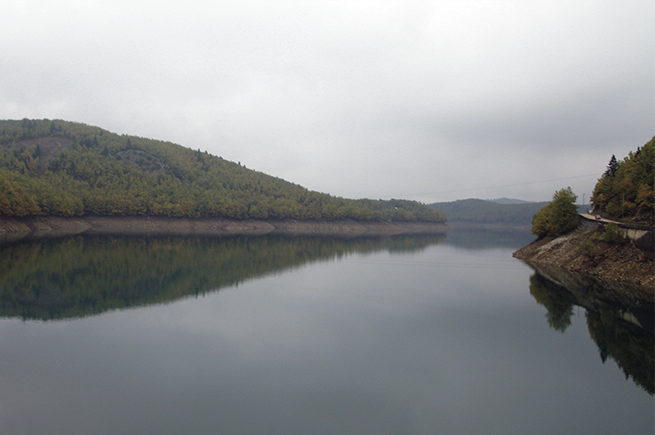 Then, we followed an uneven path with intense slopes and a relieving downhill with hairpins until Kastania, which gave us the absolute sense of freedom. There we returned to lower speed as we faced another steep uphill, halfway, up to the spring at the entrance of the village of Muha. 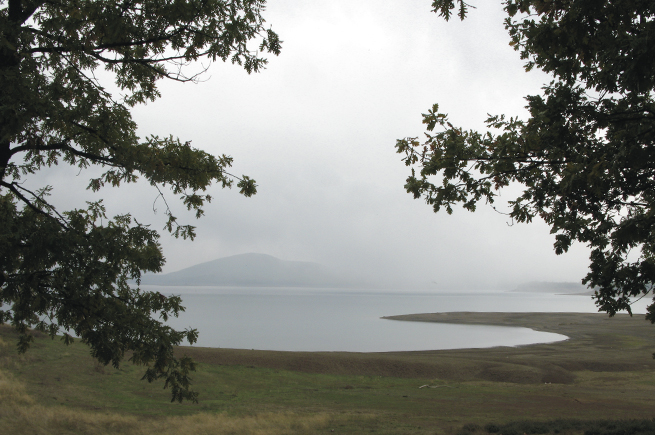 We followed the road around the lake and after cycling for twenty minutes, we came across a crowd of people who had stopped to buy Halva of Farsala (dense, sweet confection). So we did too. Then, we changed our clothes and made a walked on the dam. 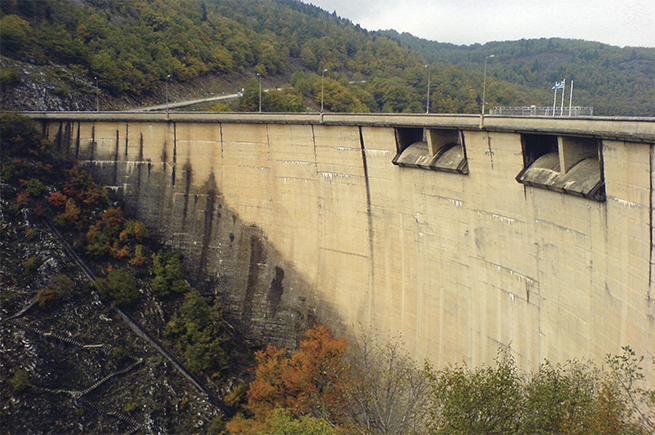 After a while, we packed all our things into the car and we headed to the west side of the lake until "Kalyvia Pezoulas", where we found an amazing spot with plane trees, very close to the lake, to set up our tents. After we finished the arrangements of our accommodation, we ended up in a tavern in the area, to regain our strength.

Besides various appetizers, we tried a delicious lamb on the spit, with fresh french fries and after about an hour we were already in our tents. 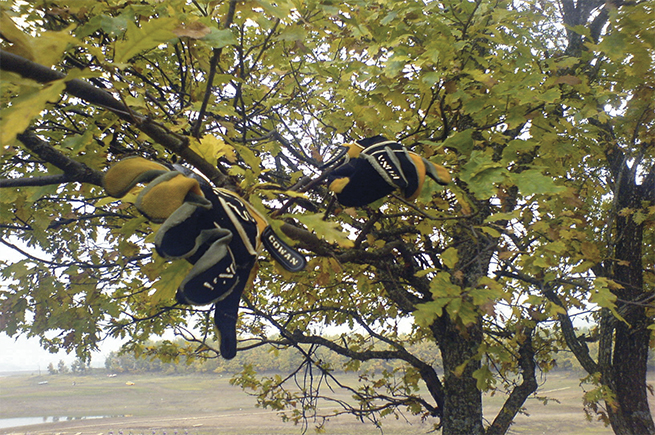 Next morning, silence and dew was covering the lake and was dazzling the atmosphere giving us a feeling of absolute calmness. With this picture in mind, we enjoyed a "handmade" Greek coffee. We packed our bags, and we used our pedals to reach the Botanical Garden. 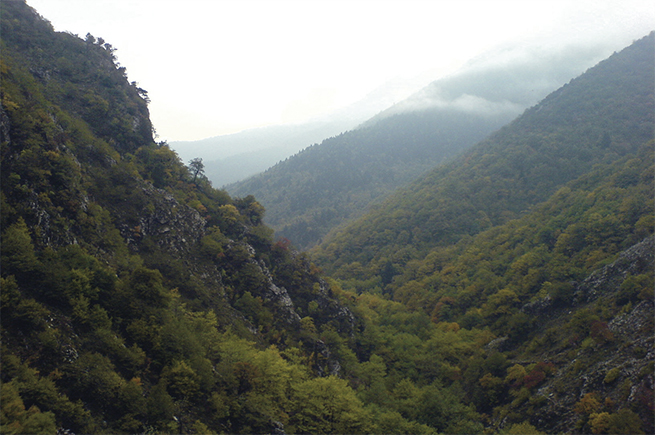 We’ve got lost in a lush green landscape, followed by especially shaped and marked bicycle paths and after a tour along the protected flowers and plants of the area, we sat down to drink a vigorous tea of cardamom at the garden`s kiosk. We bought local herbs and herbal infusions.

At that time we realized that we needed to return to the opposite side of the lake where our tour started. 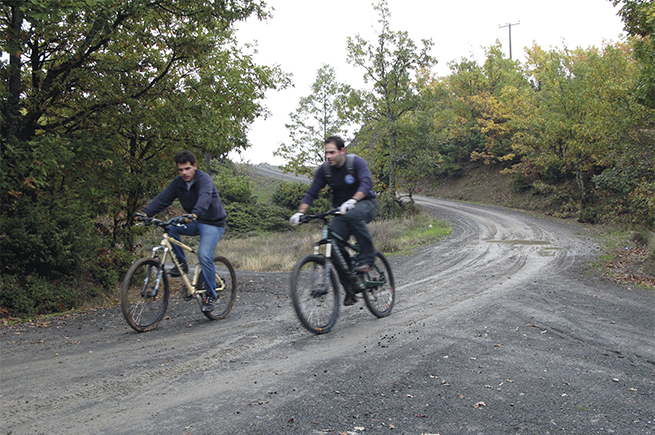 We were 25 kilometers away from "Plaz Lamperou". We decided, however, to take a shortcut. We found ourselves to ride in intense rhythm, in the middle of beech and chestnut forests, and after a while we followed muddy off-road paths, just a stone's throw away from the lake.

Our adrenaline had soared. We crossed streams that washed our bikes, removing layers of sludge - for a while at least - from the wheels, the chain and the chassis. 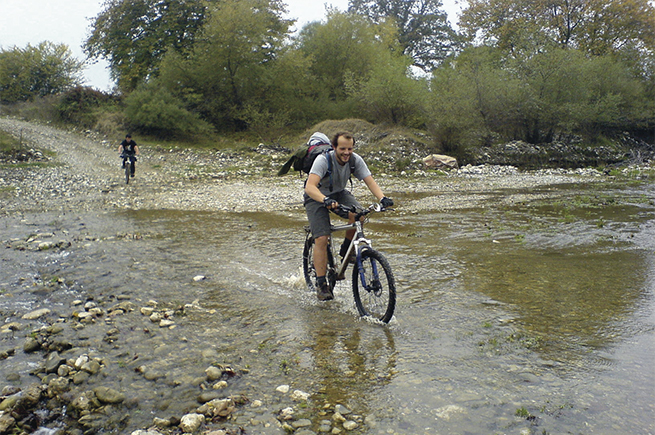 We continued for new challenges and finally, after 20 km of continuous cycling, we reached the parking lot of two taverns at the touristic "Plaz Lamberou".

It was a rich experience, full of unique pictures, moments of carelessness, sweet fatigue and physical exercise. We promised to come back in spring to get a different sense of the lake's aura, to ride on new routes and to visit new sights. 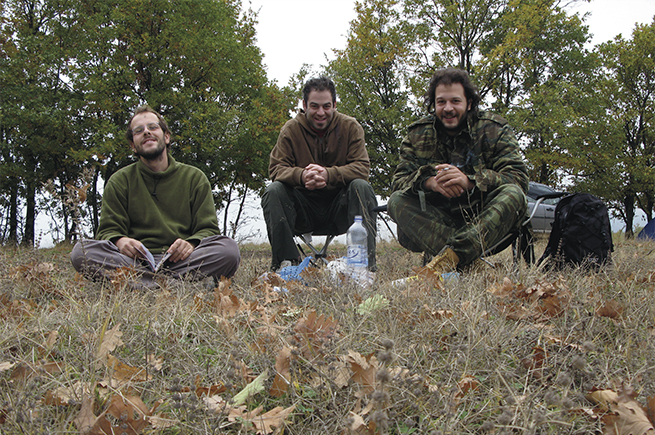