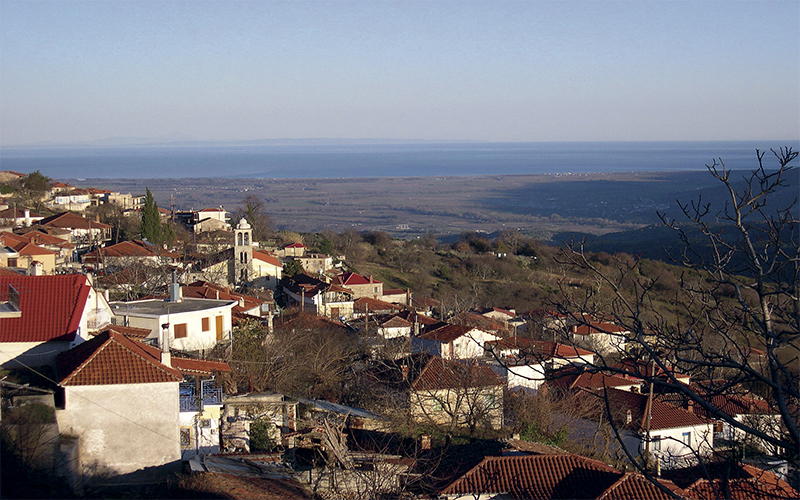 Built on the foothills of Mount Olympus, at an altitude of 550 m, Rapsani offers great view of the Aegean Sea from the slopes of Mount Sopot.

The first time I found myself in the beautiful town of Larissa, I was surprised by the winding road that I had to cross, leaving the national road, despite the fact that I am accustomed to such routes. If you are easily dizzy by the turns, you will need to be patient, but once you get there, you will forget everything...

Where it is:
We are heading for central Greece. Our goal is to reach the foothills of Mount Olympus. We reach Larissa with the bus - if you prefer a train trip, there is also this option - and from there we drive by car to Rapsani. The distance is about 40 km.

We arrive at the paved central square, where the locals have already enjoyed their morning coffee, under the incredible coolness of the ancient plane trees and continue drinking tsipouro (traditional Greek aperitif) and eating appetizers. We came at the right moment! 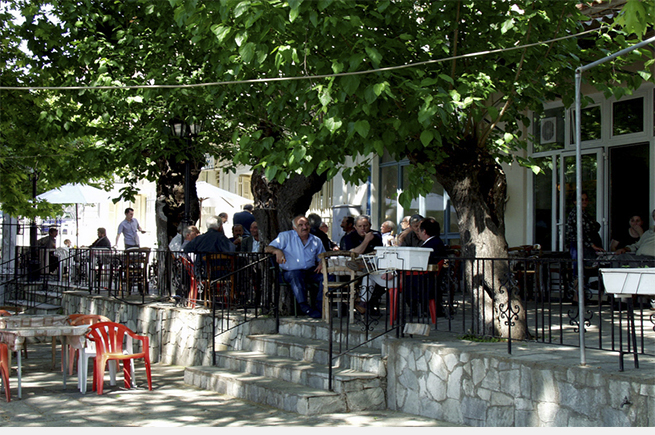 Local “tsipouro” contains also anise, and is therefore easily drunk. This is, however, slightly dangerous, as you can get carried away easily. But ... it does not matter, tsipouro cheer you up and put a smile in your face. Essential accompaniment are the delicious appetizers which they serve, such as “bougiourdi”, (it is made from cheese, tomato, pepper plant, salt, pepper and is served hot).
The specialty of the village is “kebab” and you will definitely have to try it at one of the square's taverns. Other famous local delicacies that I recommend are goat and lamb in the oven and all kinds of pies, such as milk pies, meat pies, cheese pies, and vegetable pies. As for dessert, Rapsani is known for its traditional spoon sweets, such as walnut, fig, grape, carrot, plum, cherry, and whatever else could think of, depending on the season and the fruits.
The permanent inhabitants of Rapsani, mingle with those who visit the village and with their warm hospitality, make you feel welcomed. After a while you find yourself laughing and drinking “tsipuro” all together, like a one big society.
Here, life is flowing in the rhythms you need, with calmness and without any rush, giving you the opportunity to enjoy these moments... something that is easily forgotten by those who live in the capital and more generally in big cities. 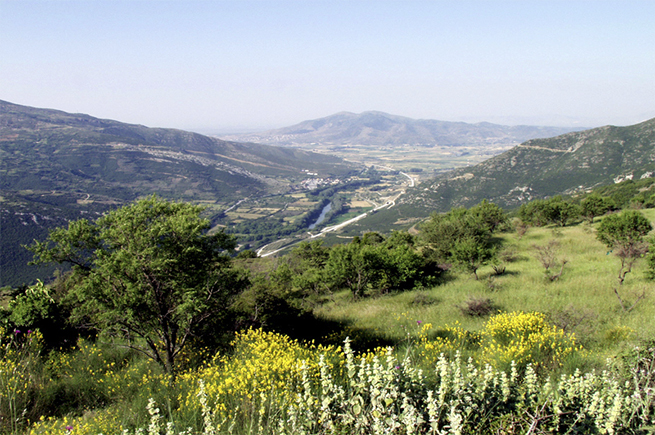 Nature at its best...

Walking in the village of the author Karagatsis

We begin to walk through the labyrinthine small streets of the village, leaving the car at the central square. We are passing by the second square of the village and continue walking to the upper district of the village which is also very beautiful, but smaller. Next to the square, you see the monument for the Heroes of the National Resistance, for which many of Rapsanians fought and died. 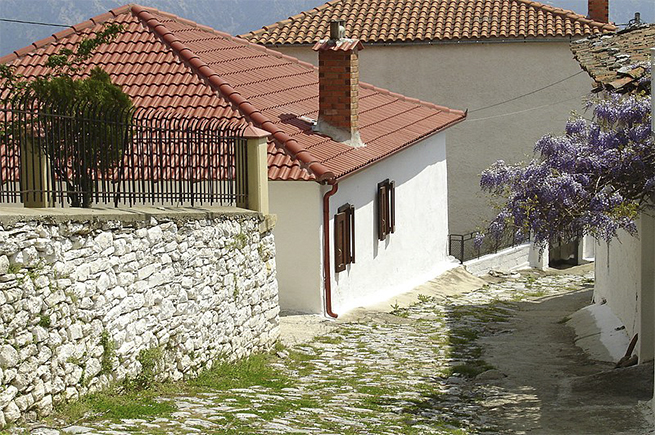 Trail of the village.

Being in complete contact with nature, you forget both anxiety and problems, and you want to stay here forever.
At Anilio, at the northeast end of the village, the view to the Aegean Sea stretches in front of our eyes. If you are lucky and the atmosphere is clean, you can see even Mount Athos. An old but well preserved grove is just above. 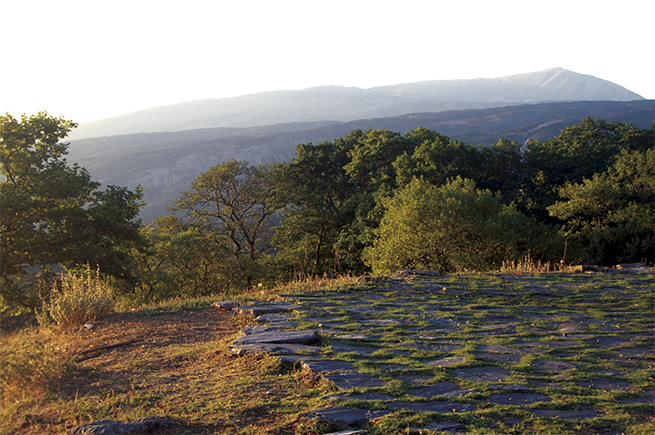 The old grove in Anilio site.

From the church of Agios Athanasios in the upper district, built in 1832 and one of the two main churches operating in the village (the other is the Assumption of the Virgin in the lower district), we enjoy a panoramic view. In the courtyard of the church is an elm tree, below which the famous author Karagatsis was sitting and reading (his real name was Dimitrios Rodopoulos).
Then we decide to slowly descend to the holy temple of John the Baptist: this is the oldest religious building in Rapsani, located in the eastern part of the village. It is also worth visiting the Monastery of Saint Theodor (3 km from the settlement), the Monastery of the Transfiguration of the Savior, the picturesque chapel of Prophet Elias, situated opposite Rapsani, the monastery of Panagia Glykofillousa as well as the Holy Temple of St. Kosmas in the northern part of the village. 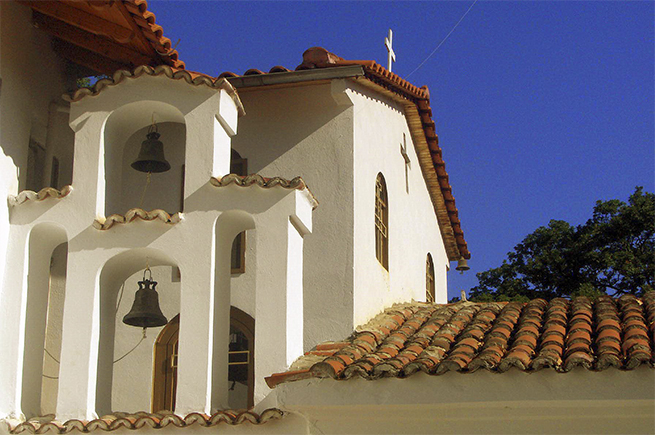 The permanent residents of Rapsani (around 600 people) are mainly engaged in viticulture, farming and livestock farming. Rapsani belongs to the Municipality of Kato Olympos.

Huge areas of vines dominate the area in a beautiful landscape on the hillsides of Prophet Elias. The trademark of the village is the famous "Rapsani" wine, produced from the exceptional traditional and unique combination of the three varieties of grapes found in the area. An ideal opportunity to try it is the Wine and Vineyard Festival, held every year in Rapsani, usually on the last weekend of August. 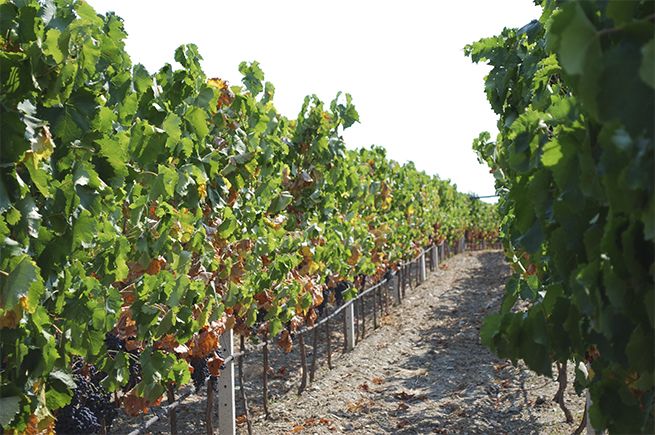 Rapsani`s vineyards are its trademark! 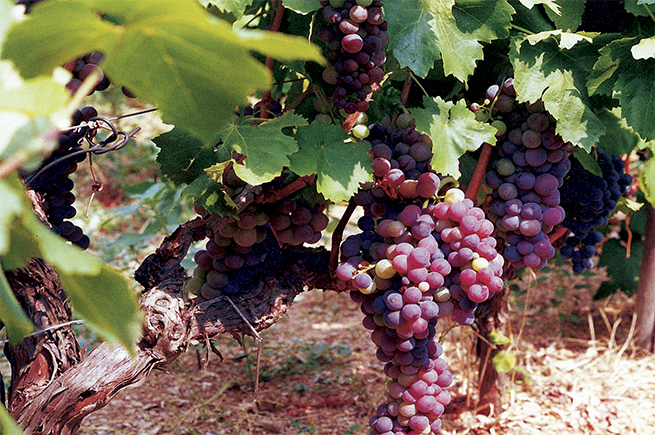 From here, the path of the wine of the Gods of Olympus passes, a reason that will bring us back to these places again very soon, to go through the vineyards, learn all the secrets of wine and learn how to enjoy it. Until then we will "carry" with us the pictures of the beautiful Rapsani and the sense of touch with nature... 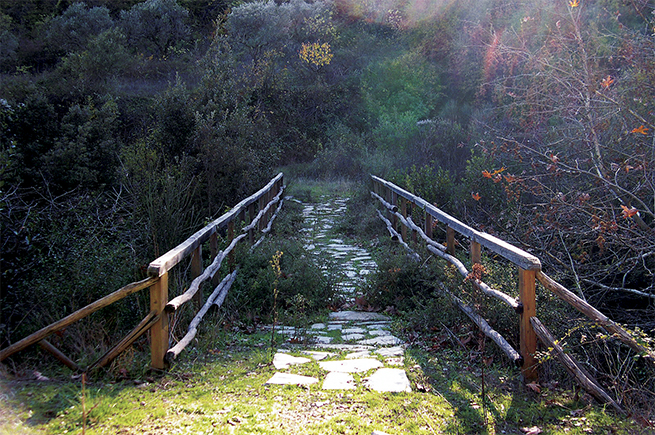 In this place, the possibilities for excursions to nature and contact with the environment, are unlimited... 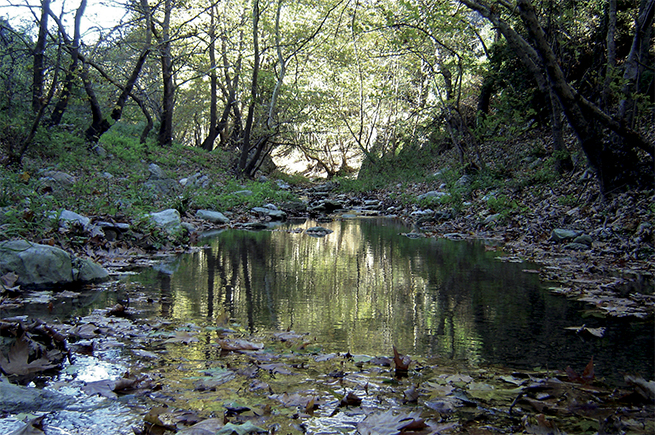