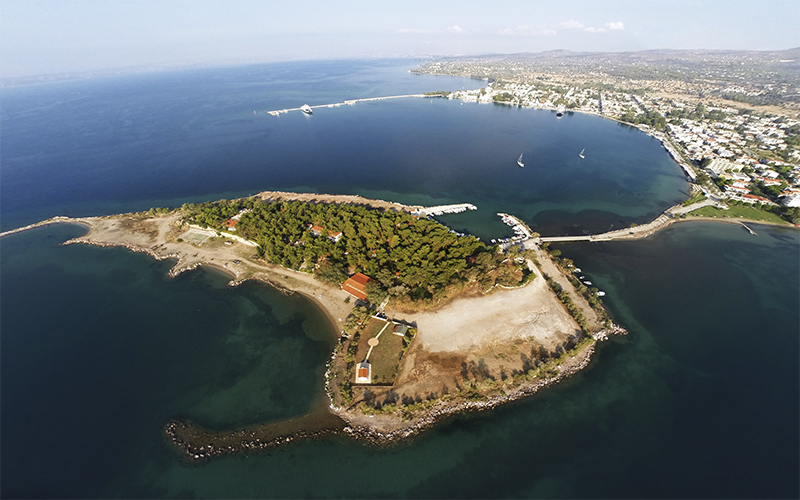 Eretria, a small Greece in Evia!

None could speak better about the municipality of Eretria than the person who was chosen by it's citizens to administer it and take care of its development. So we met with the mayor, Mrs. Amfitriti Alembate, who gave us her scientific knowledge, for this gifted place. The island of Evia reflects Greece in a smaller scale: the sea and the mountain are very close to each other. It takes a quarter of an hour to go from the beach to the top of the mountain, for example at the mountain village Seta and seven minutes at the village Geronta! The activities that you can do are many and diverse. And in this natural beauty emerges its archaeological treasure, an irreproachable witness of its long past, even equal to that of Amphipolis. With these unquestionable advantages, Eretria offers all forms of tourism throughout the year.

How to get there:
You can drive to the island of Evia passing over the high bridge of Chalkida and then you head to south Evia, or if you come from Athens, you leave the highway at Markopoulo. From there you drive downhill to the sea and aboard with your car to the ferryboat which takes you from Oropos directly to Eretria in twenty five minutes.
Athens - Eretria: 128 km

The etymologies of the names of the area, witnesses the long and glorious history of this place.

How many of us know what the words "Evia", "Eretria" and "Amarynthos" mean, and that this knowledge alone is enough to learn a significant part of the history of the island?  Mrs. Alimbate, as a philologist, informed us: "Evia, as the ancient geographer and philosopher Stravonas is testifying, is an ancient island. Its name is derived from "ευ" and "βους", meaning that agriculture and livestock farming, was prosperous and has played an important role in the development of ancient Greece. Kymi and Eretria, in fact, were among the first Greek cities which established colonies in south Italy. The name of Eretria which derives from the word "Eretes" ("paddlers") proves that it was a naval force in ancient times and it was an ally of the greatest naval power of the era, Athens. In Eretria, people from all over Greece settled and they loved it because, as they say, whoever is born in a place loves it once, and whoever chooses it to live in, loves it twice. According to the prevailing view, the name "Amarynthos" derives from "amarisso", which means "shine", for it was a bright and shining city." 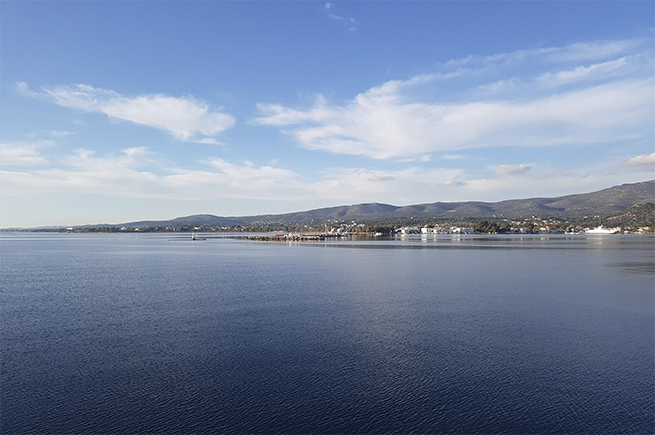 The presence of the Swiss Archeology School of Geneva`s University, proves the great archaeological interest for the place and an annex of it is occupied with excavations in the city for the last 50 years. To this day it has brought to light the sanctuary of Apollo, of the 8th century BC, which stands out for the harmonious coexistence of Ionian and Doric architectural elements, the ancient theater, the Gymnasium, the house with the impressive mosaic floors, and the revelation of the 95% of the sanctuary of Amarynthias Artemis, according to the statement of the archaeologists. 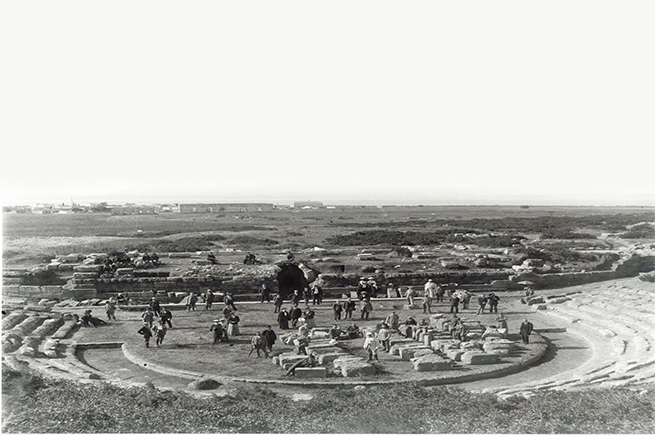 Old photo of the Ancient Theater of Eretria

The Archaeological Museum of Eretria hosts plenty of exhibits. Witnesses of the glorious and long past of Eretria are also found in the Archaeological Museum of Chalkis, as well as in the National Archaeological Museum in Athens. The archaeological interest in the treasures of Eretria was intensified after the great discovery in Amphipolis. Among the findings is the "House of Mosaics". This is a 625sqm ground-floor house, which was destroyed by a fire in the beginning of the 3rd century BC. Its architecture is a typical example of the ancient Greek residence. It includes patio, main and auxiliary spaces. The house was named «House of Mosaics» due to the beautiful mosaic decoration. On the northern side are the most spectacular mosaics.  Its iconographic themes are inspired by mythology and the ancient epic poem of Homer, "Iliad". These mosaics are identical to those of Amphipolis. At the hill Touba, northwest of Eretria, a Macedonian type tomb has been revealed, known as the Tomb of Eros. It dates back to the end of the 4th century BC, after the Macedonian domination. There are many burial monuments of this type in southern Greece. Among the findings of the tomb, which are currently exhibited at the Metropolitan Museum of New York, there are also clay statuettes of Eros, which gave the present name of the monument. This tomb refers to that of Amphipolis. 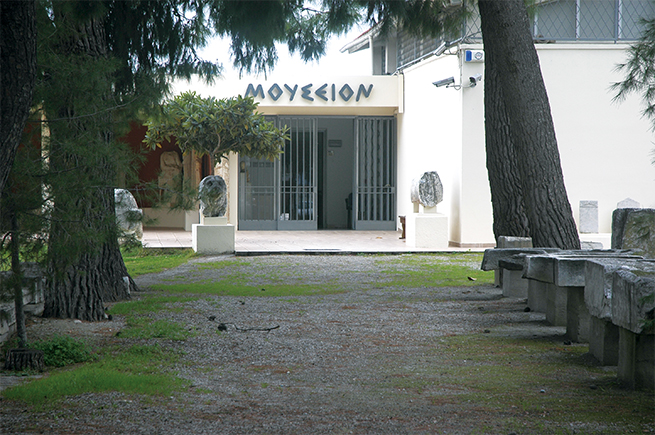 The Archaeological Museum of Eretria

Eretria is associated with the sea

The sea has been the key element of development for the place since ancient times. After the destruction by the Romans it was uninhabited due to the fear of malaria. This is the reason why Eretria has many eucalyptus trees. After the destruction of Psara in 1824, part of the Psarians was given a house and farmland by drawing lots (1st settlement). In 1922 the Asia Minors settled here and this is why we have different refugee settlements and two churches of refugees, one of Panagia Paravouniotissa in Eretria and one in Amarynthos, Agios Ioannis (2nd settlement). The 3rd settlement occurred in the 60s and 70s, when the cottages were converted into permanent residences. Since 1844 the immigrants from Psara with long flat boats were sailing straight to Piraeus, where they were trading. In the 1950s the boats were replaced by small motorized boats. In the early 1970s the first ferry boat between Eretria and Oropos on the mainland named "Venetia" was introduced. The owner was a man named Venetsianos and he had bought it at an auction. At some point the line had the potential of eighteen ferries. 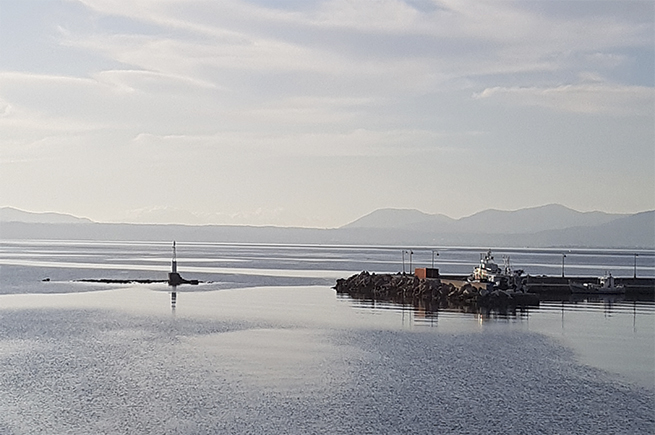 View from the ferry-boat to Eretria

Municipality of Eretria: Ideal for all forms of tourism

The municipality has large organized hotel units, which operate all year around for local tourism, as well as for organized packages from abroad. Eretria is ideal for family tourism, for alternative tourism and generally for all forms of thematic tourism. Such as, tourism motivated by antiquities, religious tourism, athletic tourism, with big basketball and football fields, cave tourism, as there are many explored and unexplored caves. The visitor can also engage in marine games, sailing, diving, and rowing. In addition to the Eretria Museum with its ancient treasures, there is also the Folk Museum of Amarynthos and the Folk Museum of Ano Vathia. Last but not least, there are the walking trails, many of which are known and others are expecting us to explore them. Undoubtedly, the Municipality of Eretria is a special and alternative tourism attraction. 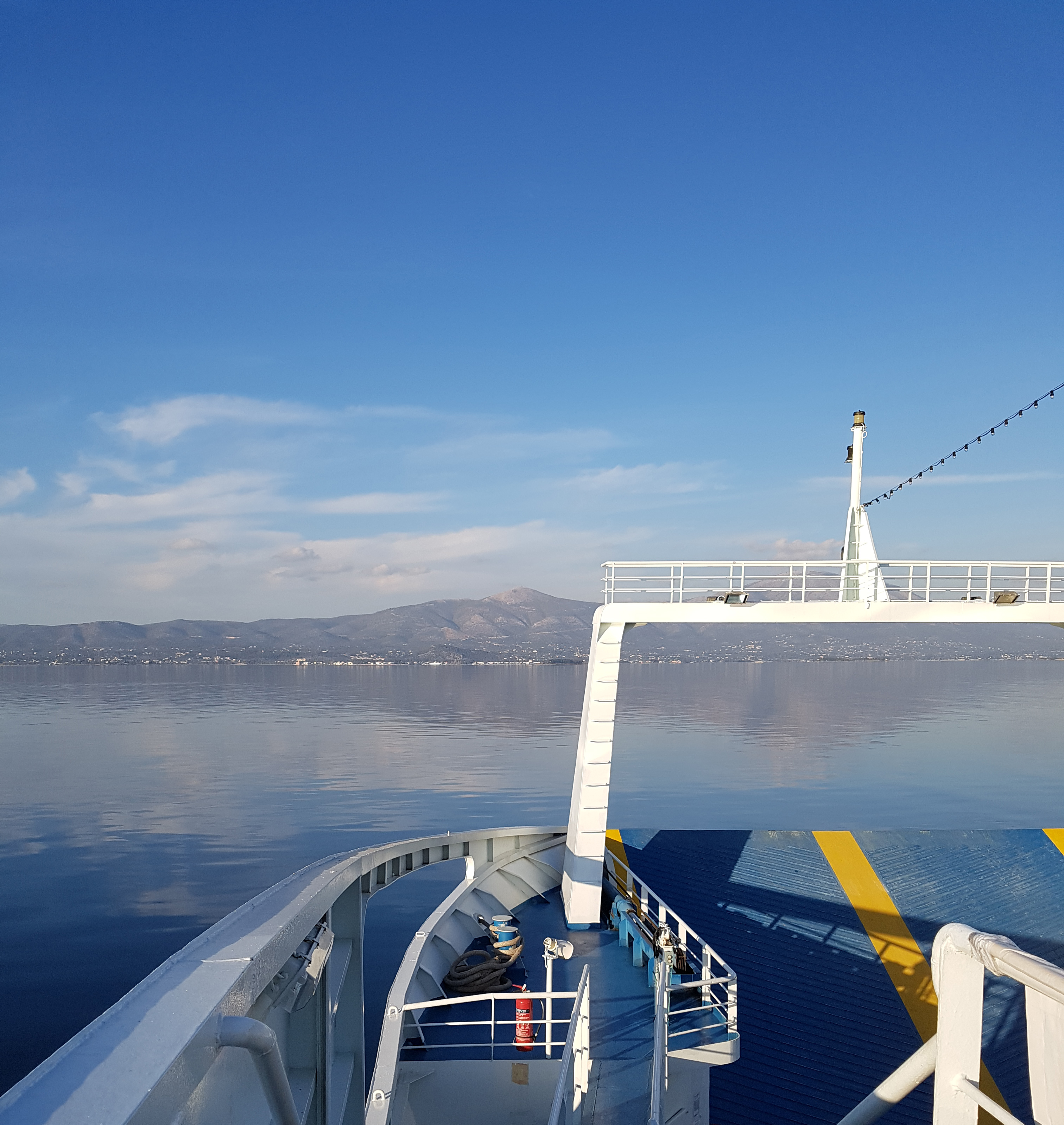 We thank the Mayor of Eretria, Mrs. Amfitriti Alembate, for all the information and time she has dedicated to us.