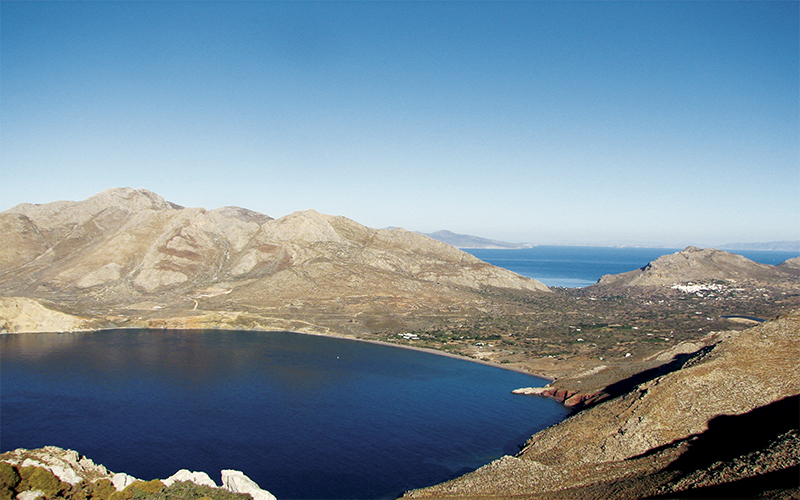 Tilos is a unique biotope and is ideal for holidays most of the year!

Where it is and how you will go:
Tilos belongs to the Dodecanese Islands and is located between Nisyros and Halki, just 65 nautical miles northwest of Rhodes. It is connected by boat to Piraeus and Rhodes, as well as to the islands of Halki, Nisyros, Kos, Symi, Kastelorizo, Astypalaia, Kalymnos, Leros, Lipsi, Patmos, Samos, Agathonisi. The easiest way to get there is by plane to Rhodes and then by boat to Tilos.

Twenty years ago, I visited Tilos in August by boat (almost one day trip) and I spent the best holidays in my life! This time I arrived at Tilos by plane, invited by Mr. Mezelopoulos, director of the NGO Tilos Park Association and it was a revelation to me. Entering the harbor at the village of Livadia, with its white houses, shops and hotels that embrace almost the entire bay, I have the impression that I visit Tilos for the first time. The only points of recognition are the castle of Agiosycia at the top of the mountain, above the village, the building of the police station on the beach, near the waterfront, with its characteristic architecture, a remnant of the Italian domination on the island for several years, and the café on the edge of the dock. 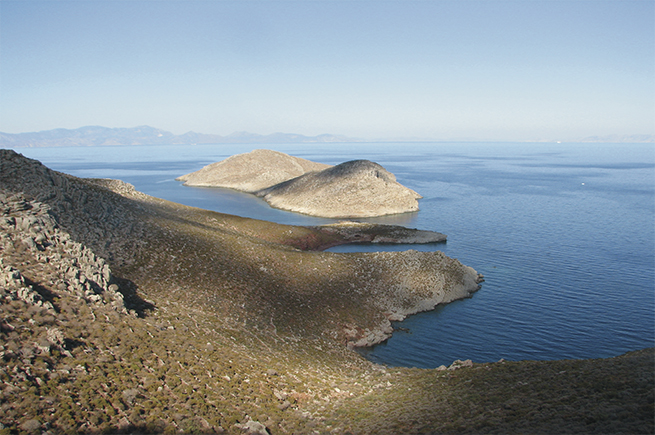 Tilos, the joy of alternative tourism

With the company of Mr. Telis, the assistant of Mr. Mezelopoulos who is a tireless tour guide, I discovered a beautiful and totally unique island. The network of its engraved and marked paths, some with a smooth course and light slopes and others that climb sharply up to the mountains of the island, leads the visitor to the 12 mountain peaks of the island, its 19 beaches, the 7 medieval castles, the 200 churches hidden between the rocks and the wild berries, scattered throughout the island, to the cave of Kharkadi, to the Byzantine monastery of Saint Panteleimonas, and is crossing an incredible habitat from one side to the other. 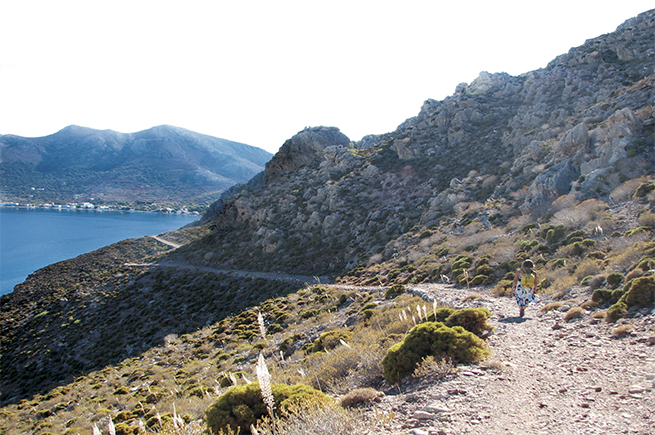 Several of the paths and routes are engraved on a map that you can find at the offices of the Association "Park of Tilos". Other trails have been marked by foreign walkers, lovers of nature and biodiversity offered by the island, who have done an excellent work, signaling the paths that are not visible to the eye, using piles of stones. So, if you see piles of stones at the end of the roads or at the paths, do not overlook them. It is certain that, if you look carefully a little further or above, you will distinguish another pile of stones, a sign that there is a path leading somewhere. If I knew it earlier, I would have reached the beach of Lethros about half an hour sooner. That's why you should pay attention to the piles of stones at the edges of the roads and the paths. 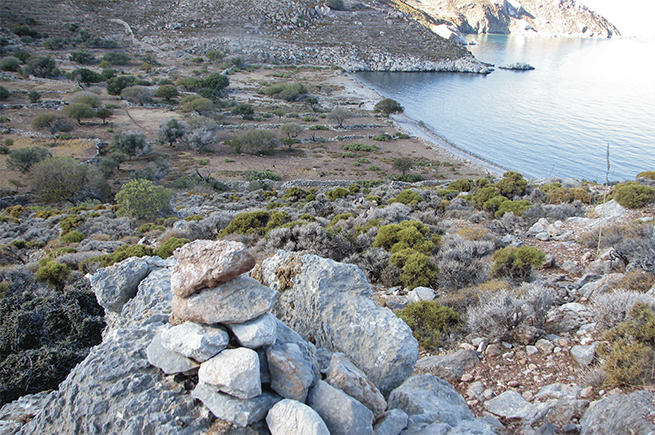 The waters of the sea are crystal clear and very warm, suitable for swimming from the beginning of spring until the end of autumn. Needless to say, it is the "Island-Paradise" for the lovers of bird watching. Springtime, with a wide variety of flora spreading fragrances into the air and the dazzling colors of wildflowers decorating slopes and meadows, is the best season for the island. Autumn is an ideal time for getting to know the real life on the island, chatting with the residents in cafes, swimming in emerald and serene waters, sunbathing alone on deserted beautiful beaches. In July and August, when it is windy, it is ideal for the wind surfing fans, but if you are not careful, you may find yourself at the nearby island of Nisyros, at the island of Kos or even at the coast of Turkey! 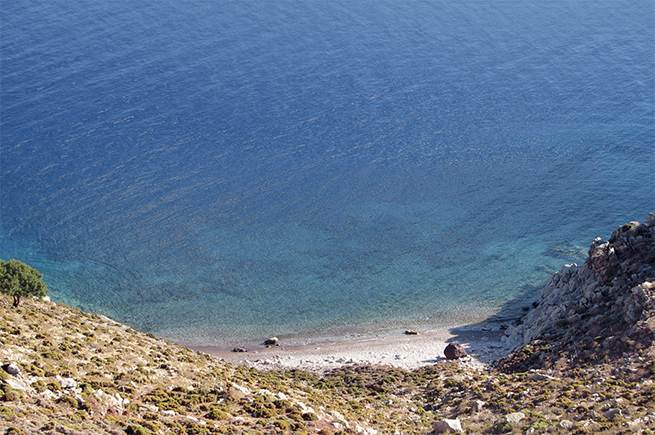 West of Plaka beach, built in 1470 on the slope of a ravine, the monastery was not only a spiritual but also an economic center of the island during the 18th and 19th century. It had a great fortune and in this monastery the banknotes used on the island were printed. Beyond the unique beauty of the monastery as a building and as an environment, it is really worth visiting it, just to meet the only priest and monk of the monastery. 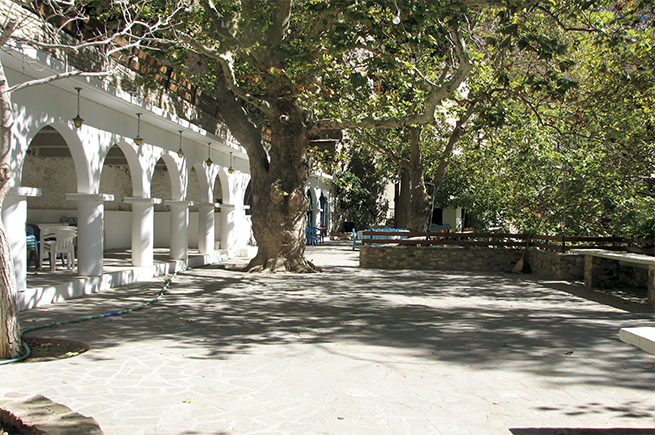 Livadia, Eristos, Saint Antonios and Plaka are the only beaches accessible from the road. Lethra, Despoti Nero, Skafi, Tholos, Saint Stergios and many other smaller ones are accessible either by small walking trails or by boat from the sea. Accessing the beaches by trails requires a strong physical condition. On the way back from the beach of Saint Stergios, you need strong lungs, because of the steep uphill trail. 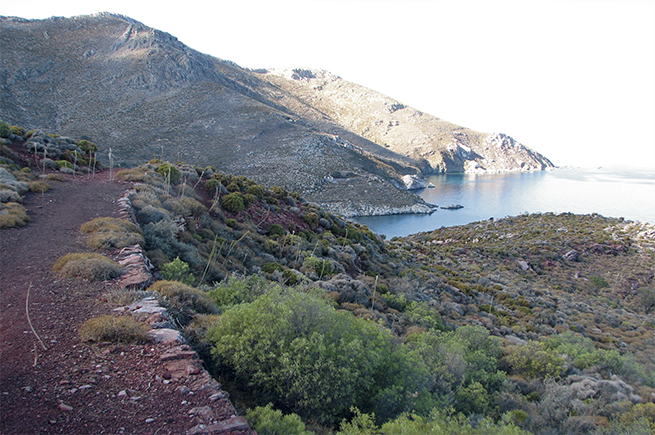 Apart from Livadia, which is also the port of the island, another settlement is Megalo Horio, built on the slopes of Saint Stefanos, with the ruins of the castle of the Knights of St. John at its top and an unlimited view. In the village it is worth visiting the church of Archangel Michael Taxiarchis, the traditional café overlooking the fertile valley until the beach of Eleftheou, the Exhibition of the Dwarf Elephants found in the Cave of Charkadi, admiring its magnificent traditional architecture and walking the old path that connects Megalo Horio with the settlement of Saint Antonios, at the bottom of which lies an ancient cemetery with fossil skeletons which you may only see, if you dive into the sea. 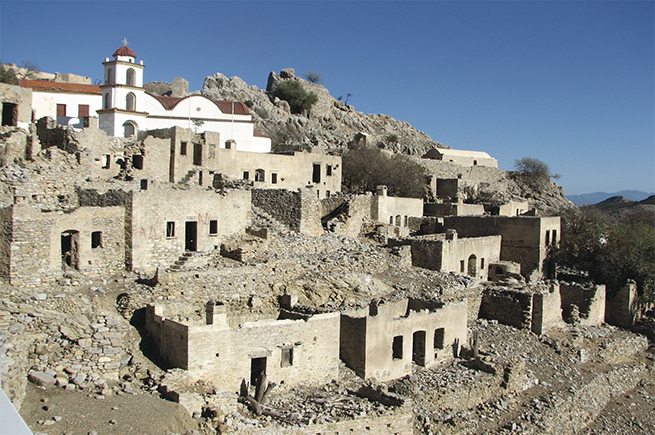 Mikro Chorio is a ghost village which was built above the village Livadia in the 15th century. After World War II, it was abandoned by its inhabitants, who descended to Livadia and settled there, using for their new homes with whatever material they could take out of the previous ones (e.g. doors, windows, railings). Nowadays its stone-built houses, stripped of any gem, wooden or metal, are hardly distinguishable from the rocky hill on which they are built. But in the summer, if you pass by at night it seems that the village is inhabited! The play of these hallucinations is due to the idea of a young man who bought a double house, which works in summer as a bar. Every summer, he is giving electricity to several houses and streets, illuminating the ghost village. For a few months, the village seems alive and somehow it is, because it becomes the favorite haunt of young people. 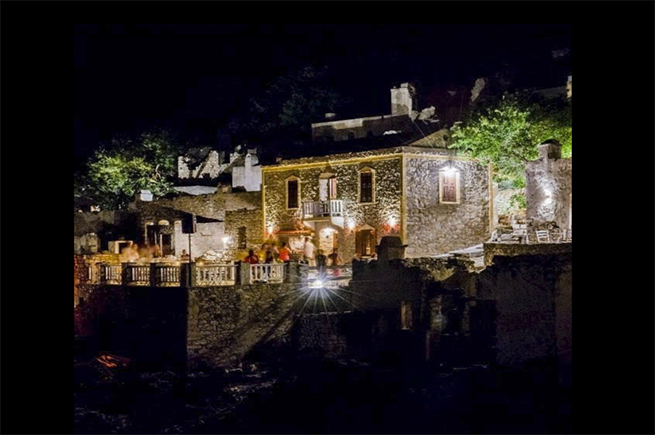 Those who visit Tilos, respect its uniqueness, as the whole island is an important habitat of global importance. Keep the environment clean and make sure you disturb the animals as little as you can with your presence. Tilos is a treasure belonging to all of us and especially to future generations who will have even less opportunities to live in such ecological paradises. 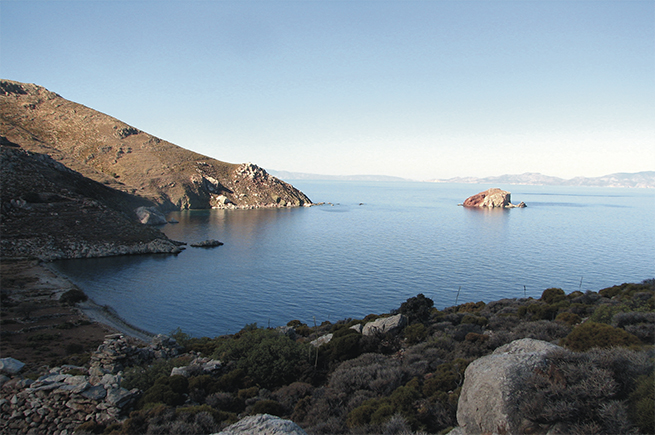