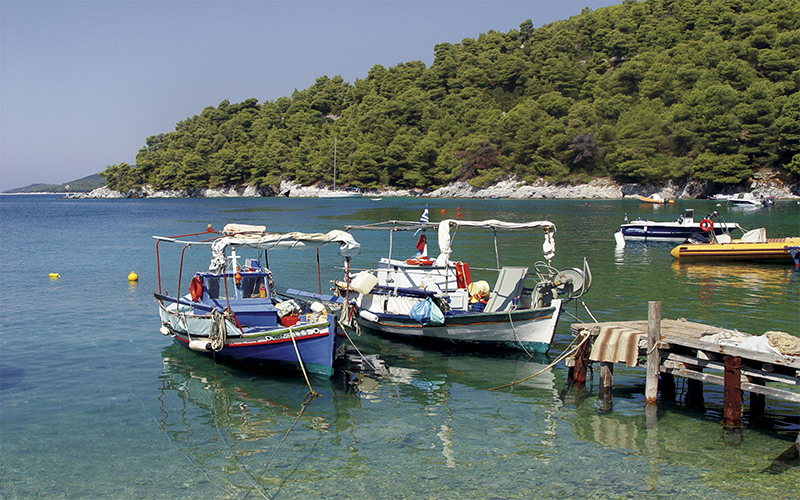 At its seashore the pine trees are touching the waves. On the freshly white painted uphill cobbled streets of Chora, you feel the beatings of her "heart". If the mingling of the mountain and the sea is what you are looking for in your vacation, you will fall in love with it.

How to go: By ferry from Agios Konstantinos (4.5 hours) and from Volos, by ferryboats and flying dolphins.

Stunned by the odors of resin, oregano and thyme, Skopelos seems floating gently in the Aegean Sea! As a neighbor of Skiathos and Alonissos, Skopelos belongs to the Northern Sporades and knows how to enchant the traveler who is looking for exactly this "marriage" of blue and green. Nature has generously endowed it with golden sandy beaches, with turquoise waters, sheltered coves and dense pine forests that reach down to the waves. 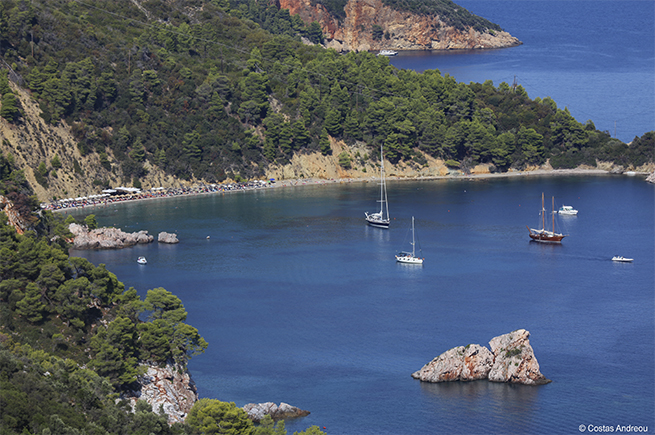 The first relics of habitation were found in the Early and Middle Mycenaean period (16th-14th centuries BC). The archaeological excavation brought to light in 1936 the tomb of King Staphylos in the homonymous bay. It is speculated that the island was inhabited by the Cretans around 1600 BC, led by mythical prince Staphylos, son of Ariadne and Theseus. In ancient times, ancient Peparithos flourished (as the island was then called) and its capital was located in the bay of Panormos. The Cretans brought with them olive roots, vines and grains that were cultivated here. In the 13th century the island was occupied by the king of Iolkos, Pellia. There was a decline for a long time. However, in the 6th century BC, prosperity returns to the island by exporting oil and wine ("the peparithios wine" was considered very aphrodisiac). On the southwest side of Skopelos, on the fortified hill of Paliokastro, was the ancient Selinounta, one of the major cities of the island. The mountain plateau of Glossa was the rural area of ​​this ancient city. In classical times, its citadel was fortified by walls that survived until today. Later, the island was occupied from the Macedonians and the Romans. Of this period are the Roman tombs of stone, "Sedoukia", as the locals call them. In Roman and Byzantine times, the island declined again. Byzantines used it as a place of exile. The name Skopelos was mentioned for the first time in the writings of Ptolemy (7th century), probably due to the many reefs around it. In 1538 AD, the island was destroyed by the pirates of Hairedin Barbarossa and in 1600 AD those who survived and resorted to Evia and Thessaly, returned and gave life again to the island. 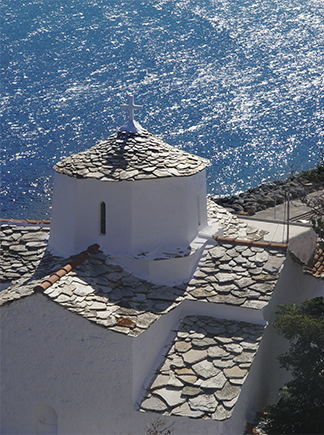 The whitewashed chapel of Panagitsa of Pyrgos overlooks the sea, hanging on the tall rock at the edge of the harbor. 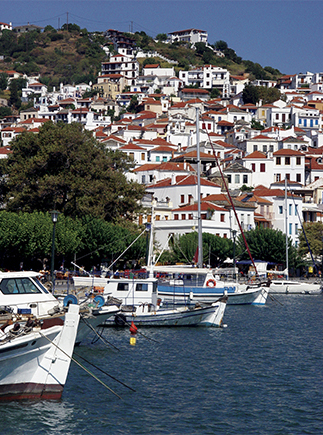 We have the first image of the island as the boat enters the harbor. The scenic Chora is built amphitheatrically around the waterfront. We start walking in its neighborhoods, with the uphill streets and the many stairs and arches. The folk architecture of the traditional settlement of Chora has influences from Northern Greece and Pelion. It does not evoke Aegean Sea`s architecture. Around us there are two-storey or three-storey houses, Macedonian type, with roofs of slate or tiles. Here is the home where the poet Paul Nirvana lived in his childhood. 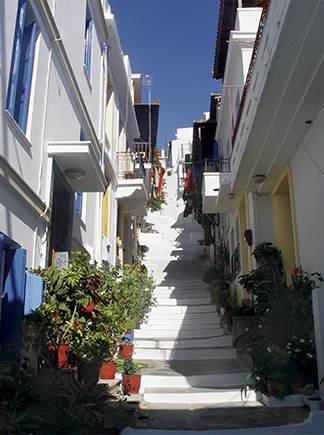 At the end of Chora's beach, on top of the rock, is the whitewashed chapel of Panagitsa of Pyrgos, with slate slabs on its roof. An important temple of Chora is the church of the Assumption of Virgin Mary or Panagia Papameletiou, built in the 17th century. On the north-west side of the church is the chapel of Agioi Anargyroi. Going further up hill, we meet the old church of St. Nicholas. The most ancient temple is St. Athanasius (11th century). Arriving at the proud Castle, we admire the magnificent view of the endless blue, Chora and the harbor. There is also a restaurant-tavern. In-between the small streets of Chora you will see the church of St. Michael of Sinadas, a stone church with colored dishes nested in its walls. A little higher we meet the old temple of Christ, with a remarkable altarpiece. Above the town hall of Skopelos is the church of Saint Pantes, one of the oldest on the island. 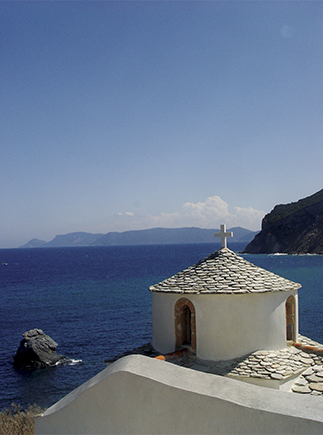 Exploring the beaches of the island: 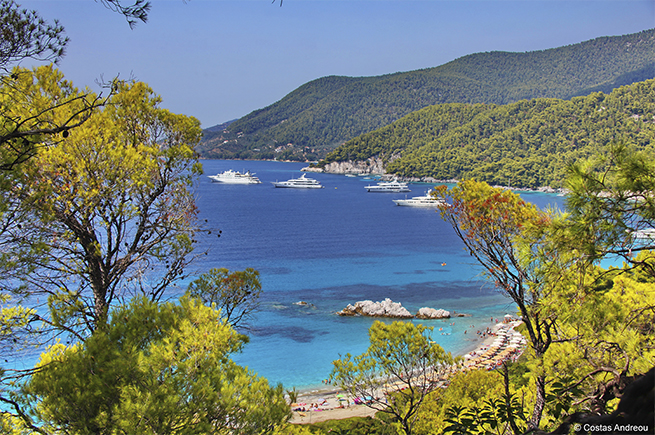 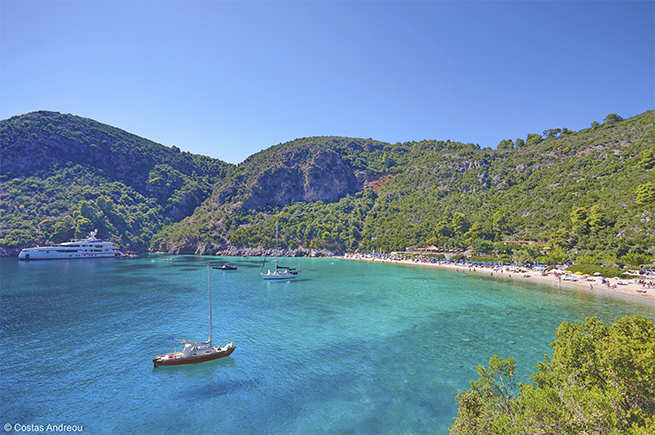 More quiet beaches on the NE of the island (behind the settlement of Glossa) are:

- It is good to have with you fruits and water, because there are no taverns. Only one cantina operates just above Gournes beach. 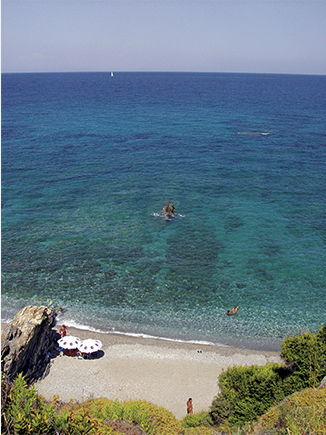 Gournes beach, behind Glossa. Beautiful and not crowded.

It is a relatively new village built by the inhabitants of Klima village, who abandoned it years ago after a major earthquake.

At the Northern part is Glossa, the second largest community on the island (after Chora). Built amphitheatrically on a forested slope and overlooking the sea and Skiathos. Its history is lost in the depths of time, when Cretans coming from Knossos settled here ... It is worthwhile to spend some time to walk through the streets of Glossa and to get lost in its picturesque neighborhoods.

We will rest in a cafe-restaurant named Loutraki with fantastic views of the port of Glossa. It is the second largest port of the island and was built on the ruins of ancient Selinountos. Before we leave Glossa, we will buy traditional sweets, made with love (avgato, almond sweets, all kind of spoon sweets etc).

If we are fans of hiking, in order to reach the sea we can take a route from Glossa that follows the old cobbled path, which once connected the village with Loutraki, its picturesque harbor. The walk takes about 45 minutes and is particularly interesting.
Tip: It is good to start early in the morning or in the afternoon for our hiking because at lunchtime the sun is very hot and dangerous. We always wear athletic shoes, a hat and a cotton t-shirt. It is also suggested to use sunscreen on all body parts that are exposed to the sun. 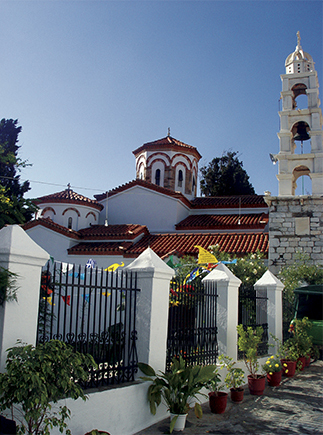 Climbing to the "Meteor of the Aegean Sea"

Shortly before arriving at Glossa, we turn right to reach a fantastic spot on the island, unknown to many people, the "Meteor of the Aegean Sea". An overgrown ravine ends up literally in the waves. Right there is a rock with the chapel of Saint John on it. We climb the 104 stairs, carved into the rock, to reach the top. From here, the glance "takes off" in the vastness of the open sea... 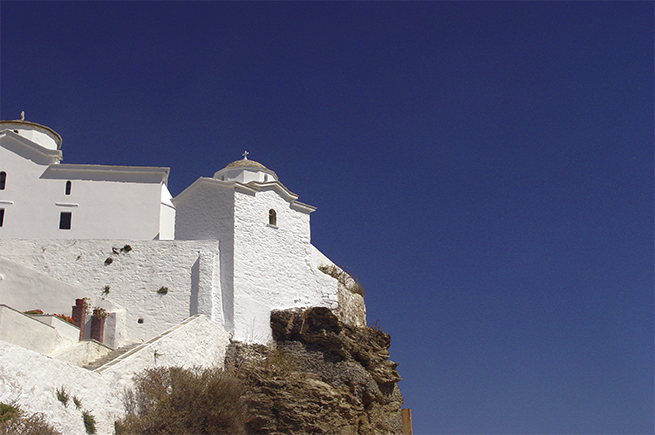 According to tradition, two fishermen saw a light in the sea and when they approached, they saw the icon of St. John. So they picked it up and went to Loutraki. The icon however, left from there and returned to the rock, on an olive tree, next to the actual chapel. Around this rock small beaches with turquoise waters are formed, offering for a swim. We can, if we wish, leave the car somewhere there and walk downhill to the "Meteor of the Aegean Sea", to exercise and enjoy the scents of the mountain (climbing up to the church will tire us a little, but it is worth it!).

How do we spend our evenings?

The nightlife of the island is concentrated to Chora and its harbor, with endless walks on the beach, in the shops with the gift and folk art items, as well as in the remarkable Photo Center that hosts major photography exhibitions. For dining we will choose a beachfront ouzeri (small traditional taverns with appetizers) or we will eat more romantically in the taverns that are nestled in the narrow streets, having their tables spread out in their flowery courtyards with vines, honeysuckle and jasmine. 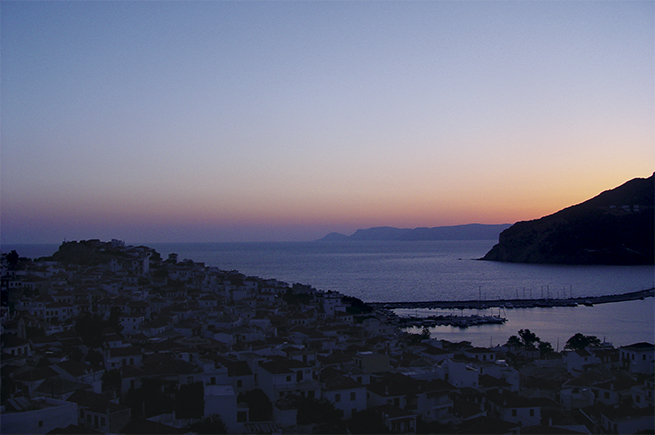 Local Flavors: Skopelian cheese pie, spaghetti with lobster and risotto with seafood. We will also try to taste the local sweets, plum, avgato and almond sweets.